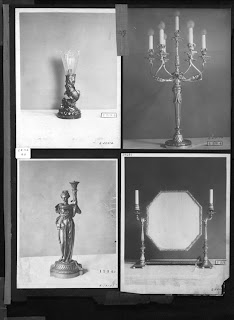 The Smithsonian has announced online access to the E. F. Caldwell & Co. Collection which “contains more than 50,000 images consisting of approximately 37,000 black & white photographs and 13,000 original design drawings of lighting fixtures and other fine metal objects that they produced from the late 19th to the mid-20th centuries.”

According to the site: Edward F. Caldwell & Co., of New York City, was the premier designer and manufacturer of electric light fixtures and decorative metalwork from the late 19th to the mid-20th centuries. Founded in 1895 by Edward F. Caldwell (1851-1914) and Victor F. von Lossberg (1853-1942), the firm’s legacy of highly crafted creations includes custom made metal gates, lanterns, chandeliers, ceiling and wall fixtures, floor and table lamps, and other decorative objects that can be found today in many metropolitan area churches, public buildings, offices, clubs, and residences. A majority of these buildings were built in the early 20thcentury, a time of tremendous growth in construction and when many cities were being electrified for the first time.