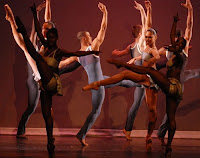 Shortly after the assassination of The Reverend Dr. Martin Luther King, Jr., Arthur Mitchell was inspired to start a ballet school that would offer African American and Latino children — especially those in Harlem, the community in which he was born — the opportunity to study dance and the allied arts. In 1969, a year later, Mitchell and Karel Shook, founded the Dance Theatre of Harlem (DTH) which the New York Times called “one of ballet’s most exciting undertakings”. Now in its fourth decade, DTH has grown into a multi-cultural dance institution and national treasure. Armed with an extraordinary legacy of training exceptional artists, DTH continues to set the standard for artistic excellence in the performing arts.

Through a rich and colorful mix of spectacular costumes, stage props, posters, programs, intimate photographs and video recordings, Dance Theatre of Harlem: 40 Years of Firsts traces the history of the company, its community outreach, renowned productions and cast of legendary dancers, fans and supporters. The free exhibition is on display in the Vincent Astor Gallery of The New York Public Library for the Performing Arts at 40 Lincoln Center Plaza, February 11 through May 9, 2009. The Library is also presenting related free public programs at the Library for the Performing Arts and the Schomburg Center for Research in Black Culture.

In a time when black dancers were all but invisible in mainstream ballet, Dance Theatre of Harlem, founded in 1969 by Arthur Mitchell and Karel Shook, brought ballet to the neighborhood and black dancers to the main stage. Since its inception the company has continued to cross social and geographic barriers by introducing the ballet world to a Creole Giselle, inviting audiences to a Caribbean wedding in Dougla, bringing black dancers to the international stage through programs such as Dancing Through Barriers® and bringing ballet to Harlem with education and community outreach.

Many of the stories behind the achievements of the company were artfully documented in photographs by Martha Swope, Marbeth and others. Those on display include photos of guests such as Hillary Clinton and Congressman Charles Rangel attending the company’s monthly open houses where performers of all arts and from other organizations showcase their talents to captivated audiences seated on folding chairs and sometimes on the floor.

One of the centerpieces of the show is an eight-foot-long three-dimensional puzzle that took artist Frank Bara two years to create. Completed in 1989, it was commissioned by Arthur Mitchell to celebrate the company’s 20th anniversary. Each layer of the puzzle, crafted entirely from wood, depicts a different aspect of the company’s first two decades in intricate detail, from ballet casts and music to floor plans and blueprints.

From the ceiling of the gallery hang original character costumes such as Firebird’s firebird and monster created by Geoffrey Holder and the wedding canopy from Dougla. Also on display are examples of tights and pointe shoes illustrating Mr. Mitchell’s ground-breaking insistence that they be dyed to match each dancer’s skin tones. Pictures from Footprints in Red document the stunning costumes designed by Salvatore Ferragamo, which needed to be such a specific blue that craftsmen were flown from Italy to Harlem to dye them just the right shade.

There are also many photographs that show rehearsals in churches and other borrowed spaces that were used before Dance Theatre of Harlem had a home of its own. Other pictures document the world-wide appeal of the company’s talent and show its famous fans like Nelson Mandela after a performance in South Africa and Princess Diana back stage in London.

Dance Theatre of Harlem’s dedication to dance and community has inspired support from a wide range of renowned figures from the world of dance. On view are pictures of candid moments in master classes being taught by such prominent dancers as Rosella Hightower and Carmen de Lavallade; William Dollar, who is coaching young ballerinas for Combat; Alexandra Danilova and Joseph Wyatt who are shown rehearsing Paquita; and Gregory Hines who is pictured tapping with children from the DTH school.

Throughout the gallery, cases exhibit show programs and tour materials including the Australian tour scrapbook that contains newspaper clips from the local press punctuated by negative stereotypes less commonly found in press coverage from the United States.

Also on view are a series of film clips including performances of Giselle and Streetcar Named Desire and a compilation of interviews with those close to the Dance Theatre of Harlem and press coverage the company has received over the years.

Free Public Programs Related to the Exhibition at the Library for the Performing Arts:

Thursday, February 12, 2009, 5:30 p.m.
Inspired by a Dream: The Dance Theatre of Harlem Story
Panel moderated by Anna Kisselgoff. With Robert Garland, Virginia Johnson and others.

Thursday, March 12, 2009, 5:30 p.m.
The Stories I Could Tell: Arthur Mitchell at 75
The Founding Artistic Director of the Dance Theatre of Harlem in Conversation
with Robert Greskovic.