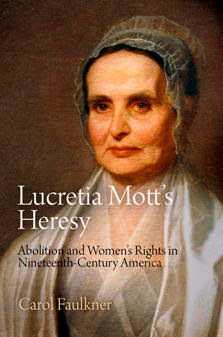 Lucretia Coffin Mott was one of the most famous and controversial women in nineteenth-century America. Mott was viewed in her time as a dominant figure in the dual struggles for racial and sexual equality. In the first biography of Mott in thirty years, historian Carol Faulkner reveals the motivations of Mott’s activism and interest in peace, temperance, prison reform, religious freedom, and Native American rights. Mott was among the first white Americans to call for an immediate end to slavery. Her long-term collaboration with white and black women in the Philadelphia Female Anti-Slavery Society was remarkable. Mott was known as the “moving spirit” of the first women’s rights convention at Seneca Falls in 1848. She envisioned women’s rights not as a new and separate movement, but rather as an extension of the universal principles of liberty and equality.

At 2 p.m. Sunday, August 28, Carol Faulkner Ph.D. will discuss her new biography Lucretia Mott’s Heresy: Abolition and Women’s Rights in Nineteenth-Century America and sign books at the National Abolition Hall of Fame and Museum, 5255 Pleasant Valley Road, Peterboro NY. Mott was inducted into the Hall of Fame in 2005 in the first group to be honored.

Dr. Faulkner is Associate Professor of History at the Maxwell School of Citizenship and Public Affairs, Syracuse University, and author of Women’s Radical Reconstruction: The Freedmen’s Aid Movement. Attention to Mott grew out of Faulkner’s interest in the anti-slavery and women’s rights movements and she became even more interested in Mott when she won a National Historical Publications and Records Commission fellowship to work on Mott’s letters. Faulkner is also a member of the Cabinet of Freedom for the National Abolition Hall of Fame and Museum.

The Mott program is the second of two Peterboro programs observing Equality Day. At 2 p.m. on Saturday, August 27 Penny Colman will discuss her new book Elizabeth Cady Stanton and Susan B. Anthony: A Friendship that Changed the World at the Gerrit Smith Estate National Historic Landmark, 4543 Peterboro Road, Peterboro.

Admission to both programs is two dollars. Stewards and students are free. The Gerrit Smith Estate National Historic Landmark and the National Abolition Hall of Fame and Museum are open from 1 – 5 p.m. on Saturdays and Sundays from May 14 to October 23 in 2011.