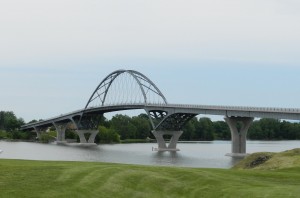 If you’ve wanted to learn more about what you see as you walk or drive over the new Lake Champlain Bridge, join the managers of the Chimney Point, VT, and Crown Point, NY, State Historic Sites for a guided walk on Sunday, July 28, 2013, at 1:00 p.m. Tom Hughes and Elsa Gilbertson will leaders a walk across and back on the bridge, and will discuss the 9,000 years of human history at this important location on Lake Champlain.

At this narrow passage on Lake Champlain humans have crossed here, as well as traveled north and south on the lake since glacial waters receded over 9,000 years ago. The channel with its peninsulas, or points, on each side made this one of the most strategic spots on Lake Champlain for the Native Americans, and French, British, and early Americans in the 17th and 18th centuries.

Meet at the Crown Point State Historic Site museum to start. Allow at least two hours. The fee is $6.00 for adults, free for children under 15, and includes admission to the Chimney Point and Crown Point museums. Consider wearing a hat and bringing water, a camera, and binoculars to bring the Green and Adirondack mountains up close. At the museums, see the Chimney Point special exhibit highlighting the archeological findings from the bridge project and experience the exciting multi-media presentation at Crown Point. Other last Sunday of the month 1:00 pm tours are August 25, starting at Chimney Point in Vermont, and September 29, starting at the Crown Point museum.