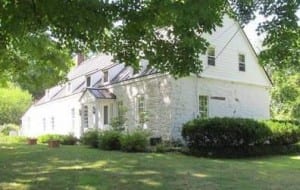 If Sarah (Hasbrouck) Osterhoudt was transported from the 18th century to her home today, she would recognize her actual stone dwelling and little else. Once the nucleus of a large and prosperous farm which remained in the Osterhoudt family for centuries, today the home sits on less than an acre and is crowded later development.

The Osterhoudt house, located on a dead-end street in Lake Katrine, NY, is one of the oldest in Ulster County. It’s about five miles from the Stockade District of Kingston where Sarah’s eldest brother Abraham Hasbrouck lived. A considerable amount of information is known about the home Osterhoudt, but little is known about the lives of the occupants themselves, most notably Sarah.

Sarah was born on February 21, 1709 in Guilford, NY, just outside of New Paltz. Roughly eight months after she was born, according to records of the Dutch Reformed Church, she was baptized in Kingston. Sarah was the oldest sister of Colonel Jonathan Hasbrouck (1722-1780). Sarah’s grandfather, Abraham Hasbrouck, was one of the founders of New Paltz known by local historians as “Abraham the Patentee.” His first son (and Sarah’s father), Joseph Hasbrouck, married Elsie Schoonmaker in 1706, shortly after he secured a large grant of land in Guilford.

As I noted in the Trials and Tribulations of Abraham Hasbrouck, Joseph died in 1724 after a short illness when Sarah was only 15 years old. He was interred in the New Paltz burying grounds on Huguenot Street in New Paltz.  The year Joseph died, locusts swarmed over the farm. His son Abraham wrote in his diary:

“And in the month of June 1724, there was a tempestuous shower, attended with a great wind, thunder & lightning, rain & hailstones, as large as a small pullets egg. And very suddenly that fields with in a short time was overflown with water and hailstones destroyed all the grain of rye & apples and severall other fruit-bearing trees about Guilford and Schwawangonck (Shawangunk) in a short time was overflown.”

In the will of Joseph, which was transcribed by Kenneth E. Hasbrouck, Sr. (but not probated), he mentioned his wife: “[She would be] in full & ample possession of my whole Estate both Reale & personal & have the issues and Proffitts thereof so long as she Remains a widow.” If Elsie remarried, she would continue to remain in control of Joseph’s estate until their youngest child turned sixteen years of age. Their oldest son received his father’s farm and Sarah, along with her remaining siblings, was bequeathed 500 pounds. She would also receive a share of her father’s personal estate, including slaves. Elsie did not remarry and thus retained control of the entire estate until she sold the home and lands to her son Abraham on in 1754.

Sarah was the third daughter in her family to be married. Her husband, William, was a widower who had been born in January 1703 (he had been  previously married to Jannetje Traphagen in 1733). The couple wed in October 1737 in Kingston in a ceremony performed by Domine Mancius. William’s new bride was described by her brother Abraham as “well shapen, good features full visage or face, blue eyes, brown hair.” She took after the rest her family, most notably her mother, who was quite tall. In fact, her brother Jonathan was over six feet tall.

Shortly after exchanging vows, the couple moved into the home which is today Lake Katrine, where their initials can still be seen today. It’s generally believed that the dwelling was much smaller at the time. According to William B. Rhoads, the original part of the house dates to circa 1691 and is believed to have been enlarged in 1740. According to Helen Wilkinson Reynolds’ Dutch Houses in the Hudson Valley before 1776 the home originally consisted of “one room, attic and chimney” and  was enlarged “by the addition to the eastward first of one room, then of a hall and a room.” Reynolds reported that no date had been attributed to the middle portion of the home, however, in 2004 , the owner of the house claimed to have located a date under the whitewash.

The couple spent their first winter in the house in 1737-1738. Sarah’s brother Abraham, recorded that this was a notable season, as a particularly bad ice storm had struck the area. When the rain came down, it “fell upon the threes as thick that thousands of trees broke in pieces.”

The Osterhoudt’s first child was born four years later, in April 1741, just after one of the worst winters in recent memory. As late as March, sleighs were still crossing the Hudson River and at times. The snow was four to five feet deep and drifts were so high that they needed to be shoveled away periodically. A second Osterhoudt child was born sometime around 1746.

In October 1760, Elsie, the first of the couple’s children to get married, was wed to Thomas Jansen. The couple’s ceremony was also presided over by Mancius. According to Kenneth E. Hasbrouck, Sr., they relocated to Shawangunk shortly after the birth of the first of twelve children, in late December 1760.

When Sarah was notified by her brother Abraham that their mother Elsie was very ill, she made the journey to Guilford. After an illness lasting about a month, Elsie died in July 1764 with all of her children surrounding her (except Rachel died in 1756). A service was held at the Guilford home and Sarah made the trip to New Paltz; her mother was laid to rest there next to her husband, who had died some four decades earlier.

June 1770 was initially a good year for the Osterhoudt Family. William, who had suffered a stroke (a “numb palsy”), which had paralyzed the left side of his face the year before, appeared to be recovering. His only son Joseph married Sarah VanGaasbeck in Kingston, but the family suffered a setback during those same months when “worms, which destroyed a great deal of wheat, rye, barley, and grass, [so] that no great burden of hay was cut, [it] being devoured by the worms.” Then, an early snow contributed more damage in October 1770. Perhaps the hardest blow to the family was when William died in the early morning of April 18, 1772. He was buried at the Dutch Reformed Church graveyard in Kingston.

In May 1779, Sarah’s brother Abraham noted that she started to suffer from “a hysterical disorder in short, [she] had a complication of disorders.” She would remain confined to her bed for the next eight months. She was visibly uncomfortable with pain in her “breast or stomach.” Abraham described his sister’s “legs, left hand and feet as swollen” for much of January. If she was corpulent later in life, her illness left her very gaunt. She died at two o’clock in the afternoon on Monday January 24, 1780.

Sarah was buried on Wednesday in the graveyard of the Dutch Reformed Church in Kingston. She was interred next to her husband. Abraham wrote of his sister that “she was a kind and loving wife unto her husband, a tender mother toward her children, a loving sister unto her brothers and sisters, an obedient child to her parents, a good neighbor, a hospitable woman, a good industrious householder or housekeeper, charitable to the poor and indigent and a good liver.”

Regarding the Osterhoudt’s home, Reynolds wrote that it remained in William’s family until 1796, eventually ending in the possession of a relative, Peter Osterhoudt. By the 1920s the home was no longer in the Osterhoudt Family.