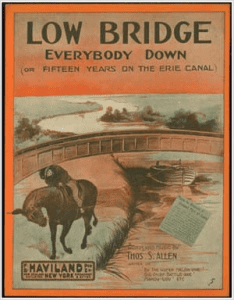 Music researcher and performer Dave Ruch has put together a comprehensive new webpage exploring the iconic song “Low Bridge, Everybody Down,” more commonly known simply as “The Erie Canal Song.”

Originally composed in 1905 by Thomas S. Allen, “Low Bridge” has traveled the globe, becoming among the best known and most beloved Erie Canal songs. Yet, few know of its origins as a commercial composition by a Tin Pan Alley songwriter.

“The song was never sung on the canal,” says Ruch, “or at least not in the horse and mule days.” He points out that the song originally had five verses and five distinct choruses, and the refrain was “15 years” (rather than miles) “on the Erie Canal.”

The new site can be found here.

Dave Ruch is a Public Scholar for the New York Council for the Humanities and a full-time musician, researcher, and performer who travels regionally and internationally from his home base in Buffalo NY. He gives hundreds of concerts and workshops each year for schools, music festivals, historical societies, museums, community events and more, and writes for the Huffington Post and his own blog.