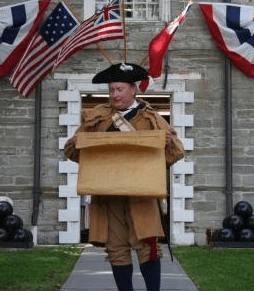 The day’s activities will begin with music from the 1770s performed on instruments representative of the 18th century, including flute, clarinet, bassoon, serpent and fife.

Readings of historical documents from the 1770s will cast light on those who held various positions on the question of Independence and its aftermath. Unlike the recent Brexit referendum on Great Britain leaving the European Union, no popular vote was taken before Congress decided to exit the British Empire. American opinion was far from unanimous, and the Declaration was only the beginning of a long struggle.

The outdoor activities conclude with a flag switching ceremony, hauling down the flag of the united colonies and raising the Stars and Stripes.

Outdoor activities are free and open to the public – regular museum admission rates apply indoors. The museum is located at 145 Fort Road, Schoharie. For information, call (518) 295-7192 or click here.