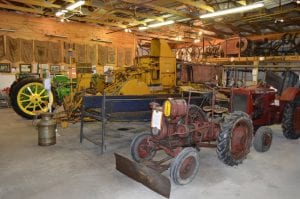 In the northeast corner of New York State, the first weekend in June features Museum Days, during which 16 facilities in Clinton County offer free admission. We were among many who appeared as special guests on both days, offering our books for sale and visiting with attendees, which meant talking a lot about “the good old days.” From that experience, I can assure everyone that a trip to the Babbie Rural & Farm Learning Museum in Peru, where we spent Saturday, is a great idea from several perspectives.

As a museum, it’s a real pleasure, and for children and adults alike, it’s fun and entertaining. But it occurred to me that it’s also a priceless gift to people in their sixties or older, and to the offspring of those folks who have heard stories about childhood chores, tools of yesteryear, and appliances that preceded modern devices.

Museums often take us back into the distant past, and the Babbie museum does that, but it also addresses more recent times by featuring household items and tools from 50 to 75 years ago, some of them used in demonstrations. Take, for instance, wringer washing machines, part of an exhibit whereby young and old can take a sopping wet piece of clothing and crank it through the wringer the old-fashioned way before hanging it on an indoor clothesline just inches away. As a hands-on exhibit, kids seem to love it, and for adults who once used wringer washers or recall their mothers toiling away over the family’s dirty duds, it takes them back to tougher times that are now perceived as fond memories. 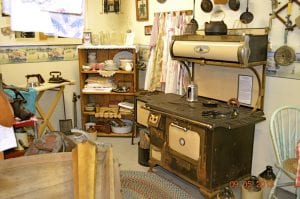 Other exhibits do the same over and over. What a gift it is for older folks—moms and dads, aunts and uncles, grandmothers and grandfathers—whose eyes light up with recognition at so many old, familiar items. The pre-popup toasters that opened from the sides, milk bottles with the cardboard pull-caps, and wood-fired kitchen stoves that cooks somehow used to produce delicious meals daily. Or lunch pails—the originals, which were actually pail-shaped; canning jars, which were key to survival during a time when nearly everyone canned a range of foods (as a child, I always wondered why they didn’t call it “jarring,” since they used jars and not cans); and a variety of toys including game boards, rocking horses, and lots of tractors from different time periods. Original wooden flip-top school desks, with pencil trays and inkwells, spawn memories of even early childhood. So much here is enjoyable, where objects serve as museum pieces, but also prompt a flood of memories and smiles for those who lived it—who rode the rocking horses, battled against burnt toast, wrung the laundry, and fed the cookstove. If you have older relatives who are hard to buy for on birthdays, the gift of a few hours at Babbie’s might just do the trick. 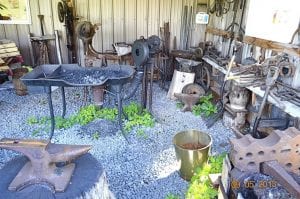 If you sense a bit of recognition in the descriptions above, I must confess—my mom’s wringer washer was a great weapon of war (I put my enemy plastic soldiers through the wringer and received quite the scolding from her). I recall smoke rising from the old toaster, meaning I was too late to save mine from burning crispy black (I hated the taste, but each of five kids only had one shot each at making our breakfast and had to live with the results). And for several years I jumped on the milk delivery truck at five in the morning and made the rounds throughout the village before heading off to school. As a pre-teen, I was thrilled to do it (with no pay involved), not realizing I was doing a lot of the milkman’s work for him. We picked up the empties from each customer’s porch, along with cash and a note telling us what to leave that same day—all of it on the honor system. At that time, the only milk cartons on the truck were individual servings for the school kids. We delivered glass milk bottles mostly in metal four-packs or six-packs. On even brief stretches of open road, the noise from bottles rattling against the metal frames was deafening. Yep … fond memories.

Except for the outhouse at Babbie’s, complete with a Sears catalog. Yes, I lived it back when outhouses were becoming obsolete, so it’s sort of a cool memory to have, but more painful than fond, at least in my recollection. Taking care of business in the dead of winter was an adventure one doesn’t soon forget. 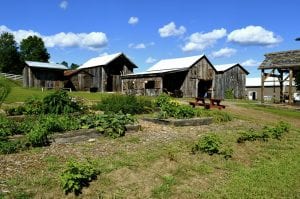 The museum was formed back in 2010 by longtime farmer Leeward Babbie and his nephew, Rick Laurin, assisted by many other family members and volunteers, and is chartered by the New York State Board of Regents. It’s remarkable what they have accomplished in a facility that continues to grow annually. There are plenty of stationary exhibits and many active demonstrations, including a shingle mill, blacksmith shop, planting and harvesting demonstrations (in season), and even Apple Blossom, a milking-cow simulator where you can pull up a stool and give it a try. Behind the main building are horses, donkeys, chickens, and other farm critters to feed and pet. An old country store was moved to the premises a few years ago and refurbished, adding to the ambience.

Founder Leeward Babbie and others are on hand as gracious hosts, including his sister, Audrey Falcon, who relishes guiding one and all through the indoor exhibits, so many of which are linked to the recent past. There’s a wide range of tools and full-sized farm machinery, and loads of family-oriented exhibits and activities that include rides on Thomas the Train, and even stagecoach rides (on the bright red stagecoach once featured at Frontier Town).

But besides the children, give a thought to your older relatives. If you’re looking to brighten their day, and in the bargain learn first-hand what life was like long ago, the Babbie Rural & Farm Learning Museum is just the ticket.

Photos: All are from the Babbie Rural & Farm Learning Museum website

A version of this story first appeared on the Adirondack Almanack.