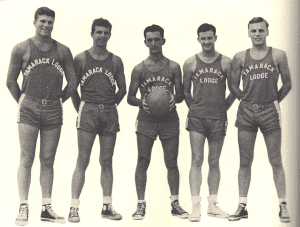 That peculiar phenomenon known as March Madness will soon be upon us, and with its arrival college basketball will be squarely in the national spotlight.

Time was, of course, that college basketball and the Sullivan County resorts were inseparable, and for years the best basketball players in the world could be found spending their summers playing ball in an informal hotel circuit of Sullivan County, NY.

That all changed in 1951, when college basketball was torn apart by one of the most infamous and widespread sports gambling scandals in history. Before it was over, the Sullivan County resort industry would be dragged through the mud, and as a result, entertainment at the hotels would be changed forever. In the 1940s, professional basketball had yet to make much of a dent on the public consciousness, and the best – and best known — basketball players were those plying their trade at the top U.S. colleges. During this era, many of those stars were recruited for summer jobs as busboys or bellhops or kitchen help at Catskill resorts so they might don a basketball uniform by night to compete against other hotels.

“George Mikan of De Paul worked and played at Klein’s Hillside in Parksville. Cliff Hagan and Frank Ramsey of Kentucky bused dishes at Kutsher’s in Monticello, probably the most sports-minded of the Catskill hotels, where Duquesne’s Chuck Cooper and Sihugo Green also played,” wrote former Borscht circuit player Jack Cavanaugh in an article entitled “Basketball, Betting and Borscht” in the July 17, 1972 issue of Sports Illustrated magazine.

“Bob Cousy, then at Holy Cross, sharpened his behind-the- back dribble and other manifold skills while a summer waiter at Tamarack Lodge in Greenfield Park. One of his teammates was Jack McMahon of St. John’s. Easy Ed McCauley came all the way from Missouri to work and play for the old (and since destroyed) Ambassador. Cousy’s playing coach at Tamarack for a time was Allie Sherman.”

By the summer of 1950, the hotel basketball league had taken on a bit of a twist. For years, resort social directors had attempted to get spectators more involved in the competition by passing out numbers for 50 cents or a dollar apiece which were meant to represent the total number of points scored by both teams in the contest. The winning number would entitle the spectator who held it to the pot of money collected. The procedure sounded simple enough, but was not always on the up and up.

“For example, at one hotel the most valuable person on the bench was not a player or coach but the guy who kept score,” Cavanaugh, who played one summer at a Loch Sheldrake hotel, recalled. “In the last period of play, it was his responsibility to keep close tabs on a clipboard list of the unsold numbers in that night’s pool. Late in the final quarter, a time-out would be called, and the non-playing accountant would inform the players of all unsold numbers that were within reach. Thus, if the score were 82-64 — it didn’t matter in whose favor — and number 146 was clear, the home team would try to freeze the ball. (If there were still a couple of minutes remaining to be played, it was prudent to aim for the next highest unsold number to avert suspicion.)”

At Grossinger’s that particular summer, a big-time New York City gambler, Salvatore (Tarto) Sollazzo, introduced himself to Long Island University player Eddie Gard, who was playing for the hotel’s squad. Gard’s Blackbird teammates Adoph Bigos, LeRoy Smith and Sherman White, considered to be the best player in the country at the time, also played for Grossinger’s that summer, as did New York University’s Connie Schaff and Jim Brasco, and Zeke Zawoluk of St. John’s. It was, as author Stanley Cohen pointed out in “The Game They Played,” his 1977 book on the scandals, “a unit that probably could have beaten any college team in the country.”

Although he was to enter his senior year at LIU that fall, Gard had used up his three years of eligibility. He was a player of modest ability himself, but he knew many of the best players in the country and had access to many others. Sollazzo was an ex-con, a jewelry manufacturer who couldn’t resist a gamble, and especially liked a sure thing. Thrown together that summer at Grossinger’s, the two decided to collaborate on a scheme to fix games, and began contacting players they knew could control the outcome.

“Sollazzo seldom stayed in one place,” Stefan Kanfer writes in his 1989 book, “A Summer World.” “Customarily he and Gard traversed the mountain roads, scouting basketball teams for corruptible talent.”

The multi-skilled Sherman White, Gard’s LIU and Grossinger’s teammate, was an obvious choice. The 6’8” forward was expected to be the number one draft choice of the New York Knicks when his college career ended, and excelled at rebounding, handling the ball and running the court. He could take over a game like no one else. For $1,000 a contest, White agreed to help keep the score of games within the betting line. With Bigos and Smith already involved, Gard and Sollazzo knew that LIU would be about as close to a sure thing as there was. But this was just the beginning.

Before long, it seemed as if everyone was in on the fixing of college basketball games, and the racket got so big it was inevitable that it would eventually be found out.

More on this next week.