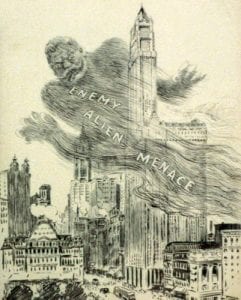 Goodness has long been an admirable part of our identity as Americans. It is evident at the national level in our response when natural disasters strike here or abroad. Closer to home, we see it manifested daily in our own Adirondacks and foothills, where people donate, volunteer, and reach out to help others. Our foundation as small-town folk is one of welcoming, caring, sharing.

Along with that comes the knowledge that we’re also lucky to be Americans, lucky to not have been born in some other country where things are much different. Many of the lessons we learned in school were derived from the struggles of others in less fortunate circumstances.

We were taught to appreciate certain rights and freedoms, to speak out against perceived wrongs, to defend the less capable, and to question the directives of those in leadership positions. In some countries, those rights are viewed as privileges for the chosen few, or are not available at all.

We were taught that in such places, life could be oppressive and downright scary. How would we react as Americans if a fellow citizen were arrested for simply having said that the nation’s leader was a fool? What if our neighbors were required to register with local officials wherever they resettled, just because of their name or who their ancestors were? What if the average, hard-working joe, after tossing back too many beers at the local bar, was jailed for making disparaging comments about our government? Or if the same thing happened to a highly respected professional in the local community? What would we do if a capable teacher was harassed as a traitor and virtually driven from her job, simply because of her supposed ancestral roots?

As freedom-loving Americans endowed with certain inalienable rights, we view such actions as poison to democracy, personally demeaning, and unthinkable in a free-minded society. Those are the types of things that happen elsewhere.

But brace yourself. Those exact things, and more, did happen here, repeatedly—not only in America, but right here in the North Country. They are lessons from the past, providing a glimpse of our possible future. Folks back then were sure it couldn’t happen on their watch, but it did. And folks today are surely just as confident that it can’t happen now.

Those incidents occurred a century ago, which seems distant and disconnected from modern times. But try this perspective: they occurred during World War I (and similar things happened in the post-war years), so the folks involved, both victims and perpetrators, were our grandparents and great-grandparents, people we knew, loved, and admired.

Briefly explained, here’s how American law made such actions not only legal, but laudable as acts of patriotism. In April 1917, almost three years after World War I began, America joined the fight for the final 18 months. While soldiers headed for Europe, the path followed at home was partially defined by the Sedition Act of 1918 (an amendment to the Espionage Act of 1917). The new law forbade a range of actions and spoken statements that we generally assume are inalienable rights, a term that mainly applies to life, liberty, and the pursuit of happiness.

Freedom of speech, of the press, and other constitutional guarantees are abridged during special situations, like wartime. To maintain order among the citizenry under those conditions, leaders seek to enjoin everyone in a common cause—to rally ’round the flag. A powerful tool to that end is defining an enemy and focusing blame on them for all manner of grievances. So, in 1918, a deep distrust and outright hatred for all things German spread across America. People of German descent were required to register as “Enemy Aliens,” and their movement was restricted.

Citizens were, in fact, encouraged to join groups with such patriotic names as the American Defense Society and the American Protective League, the latter of which formed a branch in Essex County’s Port Henry in July 1918 and described itself in this manner:

“The American Protective League is a countrywide organization engaged in patriotic activities along Secret Service lines, organized with the approval of, and operating under the direction of, the U.S. Department of Justice. One of the chief functions of the league is to investigate all cases of seditious or disloyal utterances, and to investigate all activities that apparently have a sinister significance.”

In laymen’s terms — despite the high-minded, patriotic title — the APL was citizens spying on citizens and reporting them to the government. People arbitrarily decided whether or not other community members were patriotic enough—and if not, charges were brought. APL membership reached 250,000, with the government claiming that a branch existed in nearly every city and town nationwide. Abetted by a sense of self-importance, people dove right in and the attacks began. The collateral damage left behind was immense.

Using the term “utterances” was particularly worrisome. Even speaking one’s opinion in a private conversation could — and frequently did — land someone in jail. Bail was set and hearings were held, followed by trial and punishment if a commissioner deemed it appropriate. It was a perfect example of governing by fear: point fingers, divide the populace, and just let it happen.

Aside from what occurred elsewhere in America at the time, consider a few of the many incidents that took place right here in the Adirondack region.

Because a citizen reported that Giles Schermerhorn of Keeseville said something negative about America, Giles was arrested, charged with violating the Espionage Act, humiliated by stories in several newspapers, forced to gather witnesses for his defense, and required to appear at several hearings. His case was eventually dismissed by a commissioner. Schermerhorn, it turns out, was a respected citizen; had recently chaired a patriotic meeting in support of the Second Liberty Loan program; was an active Grange member; was an American citizen; was a descendant of a Revolutionary War colonel; and was of Dutch, not Germanic, ancestry. But the damage was already done. He was an innocent victim of misguided patriotic fervor.

How about Webster Chandler of Ogdensburg? While riding on a train and discussing the war, he referred to President Wilson as “an educated fool.” An uninvolved stranger on the train, Henry Hughes of Lewis County, overheard the comment and had Chandler arrested for making seditious statements. He was dragged into court, forced to provide testimony in his own defense, reprimanded, and then released. The evidence was turned over to federal authorities, who ultimately did not pursue the case any further. But a dozen upstate newspapers had already damaged Chandler’s reputation by carrying the story. The man who accused him, on the other hand, was praised in at least two papers with the headline, “Henry Hughes, A Lewis County Man, Stands Up for His President.”

Shortly after loggers George Saulters and William Deyo left the forests of Tupper Lake for some “rest and recreation,” they were the subject of newspaper articles titled “Woodsmen Held on Sedition Charge.” Living it up as lumberjacks are wont to do, they drank to excess at a hotel and reportedly made comments in support of Germany. This prompted a call to the local police, after which both men were jailed and sentenced to 20 days for public intoxication. In addition, they soon had a federal record: the arresting officer provided a report on their “illegal utterances” to the Justice Department for further investigation.

Long Lake dentist Dr. Carl Longnecker, well known there and in the Olmstedville area, was arrested by a deputy U.S. Marshal and jailed at Plattsburgh. The charge by a fellow citizen was that two weeks earlier, after imbibing a few too many beers at Raquette Lake, the doctor said he was German and had known the Kaiser as a child. Longnecker, required to defend himself in court, was eventually absolved of guilt after asserting he had been drinking too much at the time. This “dangerous threat” to America was 67 years old, a widely respected professional, and the son of a Civil War Union soldier. He and his parents were U.S. natives.

Ogdensburg schoolteacher Mildred Hollenbeck was accused by a fellow citizen of allowing “a pro-German verse to be circulated by students in her class.” Denying accusations of disloyalty as a supposed native of Germany, Hollenbeck cited her participation in Red Cross activities, her work with other war-relief organizations, and the fact that she was of Dutch descent, not German. Under pressure and humiliated by the accusations, she resigned and accepted a teaching position in Schenectady.

There were many incidents like those, and some even more startling. Citizens who didn’t outwardly express hate for Germany and all things German were considered suspect. Editorials in several North Country newspapers openly encouraged such hatred, thus enshrining it with legitimacy. At the bare minimum, the results were deeply disturbing.

When a freshman at the Canton Theological School said, “No true Christian can have hate in his heart,” a full investigation was launched in search of subversives (pacifists) at the school, and the boy was called before the board of trustees to explain his “seditious statements.” When school professor Herbert Morrell said that a minister’s sermon was wrong because it encouraged hatred for Germans, he was called before the same board to explain himself. How unsettling to see hatred as good and pacifism as evil.

At St. Lawrence University, a patriotic speech by graduating student Helen Hazen condemned the Germans and questioned the loyalty of those refusing to hate them as much as she did. Imagine uttering the words, “There are times when to hate is holy.” She justified it with, “A sound, normal, healthy loathing of evil is not wrong. It is necessary to overcome that evil. There can be no moderate patriotism today, no half-heartedness about this war. A man is either a patriot or a traitor.” Again, define an enemy and vilify him, even if he’s your neighbor.

Jail time, false accusations, public humiliation, job loss, fines up to $1,000 for voicing personal opinions were all prices paid by innocent American citizens because unfounded suspicions driven by hatred for an outside enemy turned neighbor against neighbor. And it all happened right here in our beloved North Country, even though our grandparents and great-grandparents knew back then that it couldn’t. We’re probably just as certain it won’t happen again today.

Looking back at our treatment of African-Americans, Catholics, Jews, Irish, Americans of Japanese descent during World War II, and others at different times in our history, they all have two things in common: none of them are moments we are proud of, and none had positive outcomes.

Considering our past and the current rhetoric akin to xenophobia, perhaps paying heed to the lessons of history would be a wise path to follow instead of simply trusting in our own goodness.