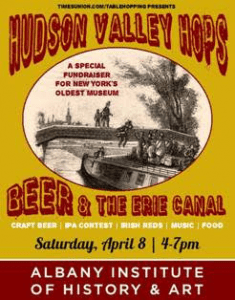 On Saturday, April 8 from 4 to 7 pm, the Albany Institute of History & Art will host the sixth annual Hudson Valley Hops. This regional craft beer tasting event is a fundraiser for the museum and is sponsored by the Times UNions’ Table Hopping blog.

It’s an opportunity for the community to sample the flavors of Capital Region craft brewers, see brewing and distilling artifacts from the Albany Institute’s collection, meet industry experts, and receive a commemorative glass. This year, the fundraiser will toast the bicentennial of the groundbreaking of the original Erie Canal with an Irish Red Ale invitational, an IPA contest, music, and more.

The theme of the event is the start of construction of the Erie Canal in 1817. In recognition of the generations of Irish who were involved in canal construction, three breweries will bring Irish Red Ales to share, including Adirondack Brewery, Chatham Brewing, and Brown’s Brewing. Adirondack Brewery will bring Ryan’s Irish Red which was developed and brewed by their production manager Ryan McDermott. Chatham Brewing will bring one of their popular recent brews. Brown’s Brewing collaborated with revered Albany Brewmaster Bill Newman to create O’Bill’s. O’Bill’s pays homage to the thousands of New York bound Irish immigrant laborers who landed in Albany’s Ferry Street docks in the early nineteenth century and took hard labor jobs digging out New York State’s Erie Canal with picks and shovels. Period music will be performed courtesy of George Ward, the designated balladeer of the Erie Canal, and a talk about the history of beer by William Schaefer.

In addition, there will be a contest to determine the best IPAs in the Hudson and Mohawk Valleys. The Master of Ceremonies for this blind taste test is Steve Barnes, restaurant critic and writer for the Albany Times Union. Judges include: Kevin Tighe, longtime beer manager at New World Bistro and Bar and now poised to open Tighe’s Bistro Americain; Dimitrios Menagias, Executive Chef of The City Beer Hall; and Tess Collins, owner of McGeary’s Irish Pub.