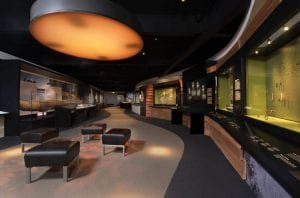 The Canadian Museum of History opened its Canadian History Hall in Gatineau, near the capital, Ottawa, on July 1. The date was the 150st anniversary of the establishment of the Dominion of Canada as a self-governing entity within the British Empire; in effect, Canada’s birthday. Creating the new Hall took five years of planning and development, including town hall meetings to solicit input from people across Canada on what should be represented in the history museum and how it should be represented.

The Hall aims to tell all of Canada’s history, from the beginning of human habitation to the present, about 15,000 years. It is intended to strengthen Canadian identity and culture and is a key part of the Canadian Museum of History’s slogan: “YOUR COUNTRY. YOUR HISTORY. YOUR MUSEUM.”

“Doing history is very difficult,” Mark O’Neill, director of the Museum who led development of the new Hall, said in an interview with the The Globe and Mail, a Toronto newspaper, last May. “We hope there is a candour and a transparency in the telling of the story that will engage visitors in ways they haven’t been engaged before and allow them to draw their own conclusions about what they are seeing.” In a press release issued the same month, he noted that “the hall is unapologetic in its exploration of Canada’s history, depicting the moments we celebrate along with the darker chapters.”

New Yorkers and historical programs elsewhere in the U.S. can learn from the experience of creating the Canadian History Hall. You can get a good sense of the Hall from its website and interesting behind-the- scenes insights from reading the site’s blog entries.

A December 1, 2016 blog post by museum designer Glenn Ogden entitled “Canadian History Hall Storytelling: The Human Experience” noted that “we looked closely at how we could tell stories about the people of the past in ways that would connect with our visitors. Our goal was to go beyond the well-documented lives of leaders and elites to explore the lives of ordinary men, women and children.” To meet that goal, they created a guiding principle that they called the “Human Experience” that helped with choices about what to present and how to do so in the exhibition. They define the “Human Experience” as follows:

“Canadian history is the lived experiences of the real people of the past, and their stories are the beating heart of the exhibition. Aspects of the human experience, such as universal themes, the expression of emotion and perception through the senses, help transcend time and place, and deeply connect the subjects of the exhibition and its visitors.”

The new History Hall sometimes goes to considerable lengths to present multiple interpretations and insights on complex issues and developments. A May 18 blog entry from design staff goes into this in detail:

“Because history is rooted in the experiences of real people, the Hall is making their stories the core of the exhibition. These myriad narratives, often expressing disparate points of view, shape an exhibition integrating multiple perspectives within an expansive storyline. This approach helps to unlock history’s complexities, while also ensuring that subtleties are brought to light, that opposing voices are heard and that visionary ideas and actions are clearly expressed.

….it means taking into account and representing the roles, experiences and interpretations of a range of people in relation to a given topic or event. In most cases, it also means including the voices of those with direct experience of that topic or event — in other words, the views of those who were actively involved, providing at times leading or even dissenting voices.

….this approach provides visitors with a better grasp of the many, and often disparate, roles and points of view that have shaped our past. In addition, it allows visitors to consider — and perhaps even empathize with — dissenting and minority voices, while better comprehending the intentions of both the majority and a visionary or two. A perspective-based approach also helps contextualize the past, showing how different groups and individuals have helped shape the country we know today…..

The Museum has viewed variables such as gender, class, ethnicity and regional experiences as key factors when it comes to shaping and defining our knowledge and interpretation of Canada’s past.”

Lisa LeBlanc, Director of Creative Learning and Development for the Canadian History Hall, shared some insights in a May 17 post entitled “Sharing Some of Canada’s More Difficult Stories.” Visitors arrive at the Museum with different backgrounds and varying degrees of comfort and tolerance for difficult topics. The new Hall’s exhibits include coverage of treatment of native peoples, restrictive immigration policies, and other sensitive topics. Museum exhibits and presentations should aim to be honest, clear and open but not intentionally shocking or disturbing. “There is always a sense of calibration,” she says. “You don’t want to be sensational, but you don’t want to be reticent, either.” She continues that “museums are keepers of evidence.

We put the content out there for people to see it in all its complexity and we provide a safe place for people to have a conversation about that evidence.” It is up to museums to say “here are the different voices, perspectives, and experiences” and leave it up to the visitor to consider what is presented and reach his or her own conclusions from it. 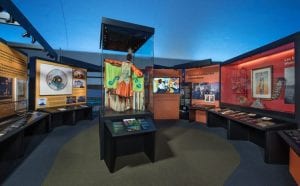 Much of the new Hall includes unique or rare artifacts carefully preserved, exhibited, and interpreted to tell pieces of Canada’s story. Some of these are well known; others are more obscure and until now not familiar to the public. A blog entry entitled “Preserving History One Page at a Time” relates conservators’ extensive work on the handwritten copy of the lyrics of a 19th century abolitionist song, “I’m On My Way to Canada,” sung by runaway slaves making their way from the U.S. to Canada, where slavery was outlawed. Among the approximately 1500 artifacts on display are an ivory carving that is the oldest known representation of a human face in Canada, and a T-shirt worn by Canadian athlete, humanitarian, and cancer research activist Terry Fox during his 1980 Marathon of Hope. There are numerous photographs, videos, and interactive displays as well.

It’s too soon to tell how the new Hall will be received by museum professionals or the general public. Preliminary reviews, mostly by journalists, are positive. Several pointed to the power of a history hall like this one to not only shape views of the past but also to provide some guidance for the future. “What will visitors make of this approach to Canada as the years go by?,” wrote a reporter for The Globe and Mail who visited the Hall a few days after it opened. “Will reconciliation have been achieved and new social projects call for new changes to the national narrative? Canadians may own the future, but it’s hard to predict our shifting views of many pasts.”