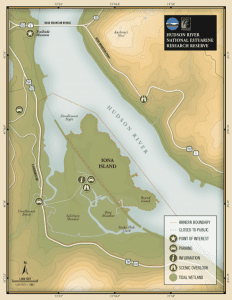 Doc Bayne is set to lead a ‘History Hike’ at Iona Island, in the Hudson River below Bear Mountain, on Saturday May 12th from 10 am to 2 pm.

A major US Navy arsenal from 1900 to 1946, complete with explosions and the famous “Mothball Fleet” following World War II, Iona Island has a story that goes back to prehistory.

Bayne will cover evidence of Native American use of the island; the colonial farms and settlements when Iona was known as Salisbury Island and, later, Weygant’s Island; and the 1800s, when it attracted tourists with an amusement park, hotel and picnic grounds.

In 1965, the Palisades Interstate Park Commission took possession of Iona Island. Surrounded by marshes, the island has become a wildlife preserve and important habitat for many species, including Bald Eagles.

Attendees are encouraged to wear sturdy shoes, bring water, and pack a lunch.

A retired New York State Forest Ranger, Doc Bayne has been the environmental educator and historian for Sterling Forest State Park for many years. He is the president of the Friends of Sterling Forest and a member of the Historical Society of Greenwood Lake (New York), where he makes his home. He also serves on the Board of Directors of the Orange County Historical Society, and the boards of the Fort Montgomery Battle Site and the Incorporated Orange County Chapter of the NYS Archaeological Association.

Meeting place will be provided with confirmed reservation. Price is $5/person. To register for this Hike through History, click here.

For more information, contact the Historical Society of Rockland County at (845) 634-9629.