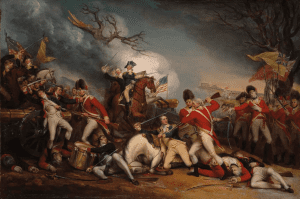 Saratoga National Historical Park is set to host Of Skulls and Skeletons: Military Burial Practices and Battlefield Clean-Up along the Washington-Rochambeau National Historic Trail, presented by Robert A. Selig, Ph. D. on August 19, 2018 at 1 pm.

Battlefield clean-up is a topic rarely covered by modern historians yet following almost any military engagement, there are corpses to dispose of.

This talk will address questions such as: Who does that? Can we tell who buried whom? When? How many hours, days, months later? Where? Individually or in mass graves? In natural crevices? Lakes? Naked or dressed? Officers and other ranks together or separate? How long do they remain in the ground? Are they ever found? Who would dig them up and why? Can we identify them? What happens with the skeletons?

For more information about this or other events, call the Visitor Center at (518) 670-2985 or visit their website.

Illustration: The Death of General Mercer at the Battle of Princeton, January 3, 1777 by John Trumbull, Dr. Benjamin Rush and General George Washington enter from the background, with Captain William Leslie, shown on the right, mortally wounded.