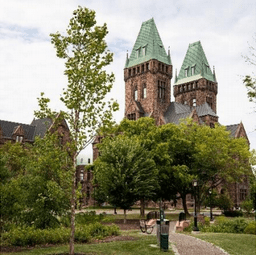 The National Trust for Historic Preservation has announced the 145-year-old Richardson Olmsted Campus in Buffalo, New York as one of only three winners of the 2018 Richard H. Driehaus Foundation National Preservation Awards.

Given each year at the end of a juried competition, the Driehaus Foundation National Preservation Awards are bestowed on historic preservation efforts that demonstrate excellence in execution and a positive impact on the vitality of their towns and cities.

Originally built in 1872 as the Buffalo State Asylum for the Insane, the campus contains 13 buildings across 42 acres of grounds. It was designed by Henry Hobson Richardson alongside the landscape team of Frederick Law Olmsted and Calvert Vaux. At the time, the asylum was known for combining the most advanced principles in psychiatric treatment with state-of-the-art technology. However, as mental health treatment evolved, the building and grounds were reduced in size, and land was transferred to create Buffalo State College in 1927. Patients were eventually moved to a new facility, and the campus was abandoned by the 1970s.

The first phase of redevelopment is now complete and includes a hotel, a restaurant, and an architecture center — creating nearly 600 jobs and generating new sales tax revenues.