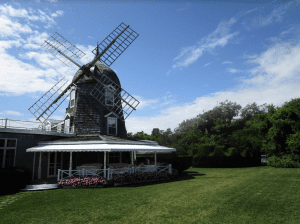 The 10th Annual Southampton House Tour, “Insider’s View,” has been set for Saturday, June 1st, at the Thomas Halsey Homestead, 249 South Main Street, and throughout the Village of Southampton.

The event will begin with a kick off toast from noon to 1:30 pm, at One Kings Lane on Jobs Lane. House tours will take place from 1 to 4 pm at various locations in Southampton. A champagne reception will be held at Rogers Mansion, 17 Meeting House Lane, from 4:30 to 6 pm.

Houses and buildings on the tour include:

Windmill House: Ever since C. Wyllys Betts purchased the Good Ground (Hampton Bays) windmill in 1880, moved it to Southampton, and attached it to his cottage on Gin Lane, the picturesque combination has been a favorite landmark, painted and photographed hundreds of times. The current owners, who acquired it in 1989, undertook a complete restoration of the mill and its sails, and filled the cottage with artfully placed furnishings and objects that reflect their tastes and their travels.

Folly Fields: The owners of Folly Fields wanted a traditional design for their weekend home on a country road and asked architect Eric Woodward for a design that would fit into the neighborhood and make entertaining easy. A large living room and a well-equipped kitchen more than met their needs at the time. Eventually, they added a movie theater on the lower level and a rose-covered pergola — their “folly” — which has allowed them to take their entertaining outdoors.

Elegant Getaway: The house is built in the style of a classic shingle-style Hamptons estate with elegantly rounded lines, deep wrap around porches and asymmetric, yet balanced, architectural forms. It is evocative of famed historic summer homes that were built to embrace their surrounding landscape while providing a grand setting for warm-weather living. Inside, a clean, contemporary design theme is artfully balanced against traditional architectural forms. The property, lushly landscaped, is within earshot of the surf.

The Farm House: Designed in the Farmhouse style and sited on the property to maximize views of and access to the multiple garden settings created by Landscape Details, this newly constructed house was designed by local architect Brian Brady and was completed in 2013. Although at first glance one sees the house as a quaint village home, its charming exterior belies the fact that it is composed of four floors of living space, including seven bedrooms. The angling of the structure on the site and the stepped massing give the house an intimacy and comfort that never feels overpowering, and is in keeping with houses built at the turn of the century. Owned by a family with young children, the house maximizes the use of all of its spaces to accommodate and encourage their active lifestyle.

1708 House: If walls could talk, no structure in Southampton would have a more fascinating tale to tell than the 1708 House, the historic structure that is currently a boutique hotel in the heart of the village. Sixty years before the 1708 date Jonas Bower laid the foundation for his house on this same spot and his basement survives today as the hotel’s wine cellar. In 1698, Isaac Bower built a bigger house over the original and the present owners speculate that conspiratorial patriots might well have gathered in the ancient cellar to exchange information on the activities of the hated British occupying forces during the Revolutionary War. The prominent Hunting family of local whaling fame took possession of the house in 1799, after which the Foster family became the owners. In 1993, the present owners undertook the painstaking restoration that has preserved one of the village’s most treasured landmarks. Refreshments will be served at 1708 House from 1:00 pm to 4:30pm along with tours of the house.

St. Andrew’s Dune Church: The Church at the foot of Lake Agawam is one of Southampton’s most picturesque landmarks. Originally built as a life-saving station, it was acquired by Dr. T. Gaillard Thomas and donated as a church in 1879. A local carpenter was hired to create its beautiful rustic interior, which is filled with treasures, not the least of which are its 11 Tiffany widows. Though it is non-denominational, its summer services are organized under the direction of Southampton’s Episcopal Church.

The Thomas Halsey Homestead: New York State’s oldest English-style house was a farm established in 1648 by Thomas Halsey, one of Southampton’s original settlers. Today it is managed as a historic house museum by the Southampton History Museum. It provides an authentic setting to exhibit furnishings and tools that would have been used by a prosperous farming family during America’s Colonial Period. Behind the house is a Colonial-style herb garden.

Historic Library Building: The Rogers Memorial Library was founded in 1892 with a bequest made in the will of Harriet J. Rogers, in memory of her mother, Clarissa Rogers. The building was designed by R.H. Robertson, a notable New York architect who was a summer resident of Southampton. He chose hard burned North River brick for the Victorian Gothic building and a slated roof. It originally had a seating capacity for 250 people, with a large reading room, a reference and librarian’s room and shelves for some 20,000 volumes. An apartment above was intended for the custodian. The construction firm, Holland Emslio, of Cornwall Landing, New York, completed the job for $20,000 and the library opened to the public in 1896. In 1915, Grosvenor Atterbury, another well-known architect who summered in Southampton, designed an addition. In 2000, needing still more space, the library moved to its current location.