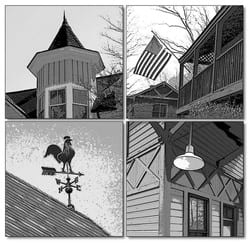 Since 1991, the Historical Society of Rockland County has presented over 90 awards to public agencies, private individuals, community-based and religious organizations in recognition of their preservation efforts in the County.

The Committee also supports continued, critical action to help save Rockland County’s environmentally sensitive areas and endangered architecture. Instituted to preserve the historical heritage of the County, the annual program celebrates each May with a declaration of “Rockland County Preservation Week” by the County Executive, a country supper and awards ceremony.

Virginia Norfleet: Margaret B. and John R. Zehner Award for contributions to the county’s history and for underscoring the value of historic preservation to the community.

Ginny and John Wall: Preservation Leadership Award for individuals, groups, and government agencies that display outstanding leadership or continuing contribution to the preservation of historic resources in Rockland County.

With Special Commendations going to:

Joseph Beckerle (posthumous) for the rescue of the fireplace surround and mantle from the Thomas Smith House, Haverstraw.

All of the awards made by the Society in 2019 underline the positive effects of preservation on the community. The awards are made by the Committee for preservation efforts on homes, businesses and structures, both modest and grand.

Since 2015, the ceremony has also included the “Shine a Light on Historic Sites” feature. The committee has included this effort to draw attention to “at risk” places in the county that need preservation attention, support and advocacy from the community.

For information on attending the awards ceremony and country supper, which will be held on the grounds of the Jacob Blauvelt house on Sunday, May 19, 2019, click here or contact us at (845) 634-9629 or info@rocklandhistory.org.