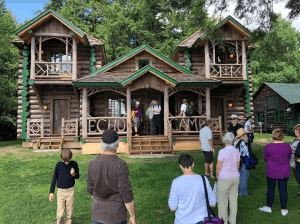 Adirondack Architectural Heritage (AARCH), the nonprofit historic preservation organization for the Adirondacks and North Country, still has openings on several outings that are part of their ambitious annual tour series.

Day-long and half-day tours slated for June, July, and August that still have some openings are detailed below:

The Plattsburgh Military Reservation goes by many names — the Plattsburgh Barracks, the Plattsburgh Air Force Base, even simply “the Oval.” Regardless of what you call it, there’s no dispute was the scene of British and American engagements during the War of 1812, and housed elements of the U.S. Army and Air Force throughout the 19th and 20th centuries. Join AARCH board member and historian, Richard Frost, for an in-depth walking tour of this historic cross-section of North Country history and architecture. The base is now home to two successful adaptive reuse projects-turned craft breweries. The tour includes a stop and sample at the historic fire station, now home to Oval Craft Brewing. The former carriage house for horse-drawn fire carts was built in the 1890s and is now the location of the brewery operations. We will end our afternoon at the Valcour Brewing Company, the former (1838) Old Stone Barracks, where we’ll have the option to relax with a burger and brew. Stops include the Clinton County Historical Association and Battle of Plattsburgh Association to get a sense of Plattsburgh’s broader military role in the history of the North Country, the Plattsburgh Memorial Chapel, built during the early 1930s for servicemen and those housed at the Barracks, and a nearby barracks quarters converted into a private residence.

This tour is led by AARCH board member Richard Frost, co-author of The Plattsburgh Military Reservation. The fee is $40 for AARCH members and $50 for non-members. Tour will include samples at local breweries.

Preserving Camp Santanoni, Monday, June 24 AND Monday, September 16 (Newcomb): Camp Santanoni and Santanoni Preserve is an extensive estate covering nearly 13,000 acres. Construction started in 1892 and at its heyday, the property included nearly four-dozen buildings, a 200-acre working farm and a Japanese-inspired log villa. In 1972, Camp Santanoni was acquired by the State of New York and became part of the Forest Preserve. For over 25 years, AARCH has led the effort to protect, interpret, and share this regional treasure. Join us and journey back in time on an in-depth tour of this National Historic Landmark. Enjoy a leisurely draft-horse wagon-ride or hike along the 9.8 mile round-trip excursion. Stop at the Gate Lodge and farm before arriving at the main camp, masterfully perched on Newcomb Lake. Eat your picnic lunch under the same eaves that sheltered Theodore Roosevelt. On a private tour, walk into the camp’s buildings to appreciate past and present workmanship, hear about the families and celebrity guests who summered here, and see first-hand efforts to conserve this Park jewel.

This tour is led by Adirondack Architectural Heritage (AARCH) Executive Director Steven Engelhart. There is a suggested donation of $25. A limited number of seats are available on a horse-drawn wagon for an additional $30 fee.

*This tour involves a 9.8 hike on dirt road or wagon-ride. 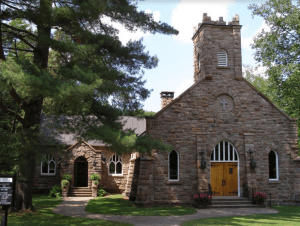 Big Moose Lake’s rustic architecture is uniquely distinguished by its vertical, half-log construction. At a time when there were no saw mills in the vicinity, local builders developed this construction technique by which walls of pit-sawn logs were used for a building’s structure, exterior, and interior finishes. Witness the work of Henry Covey, his son Earl, and the E. J. Martin family who helped settle the lake by providing guide services for sportsmen, building inns and lodges, and constructing rustic camps for seasonal residents. Their building style creatively made use of readily available lumber with limited technology. The tour will include visits to the Big Moose Community Chapel, Covewood Lodge, Brown Gables, the Manse and The Waldheim.

This tour is led by AARCH’s Steven Engelhart and our knowledgeable local guides and property-owners. The tour begins at 10 am and ends around 4 pm. The fee is $45 for AARCH members and $55 for non-members.

A Public Architect: Alvin Inman, Monday, July 29 (Upper Jay/Clintonville/Peru/Plattsburgh): Plattsburgh native Alvin Walter Inman (1895-1950) is one the most important North Country architects that no one has ever heard of. See the work of this uniquely public architect who weathered the Great Depression to produce some fantastic Colonial Revival and Period style schools, churches, libraries, civic buildings, and private homes across the North Country over his career of nearly 30 years. Begin the day visiting two 1930s, rural grade schools in Upper Jay and Clintonville, followed by a visit to a luxuriously designed, Medieval-inspired Tudor structure, The Stone House at Valcour Bay. Lastly, head into Plattsburgh and embark on a short walking tour exploring the architect’s local business facades, churches, and a few private homes, including his own 1938 English Tudor residence.

This tour will be led by AARCH Executive Director Steven Engelhart and AARCH Educational Programs Director Nolan Cool, and begins at 10 am and ends at 4 pm. The tour fee is $50 for AARCH members and $60 for non-members.

Isaac Johnson: Stone Mason & Freedom Seeker, Monday, July 29 (Ontario, CA/Waddington, NY): Isaac Johnson’s arrival in the North Country during the late 19th century came after an eventful and tumultuous life. Born enslaved to his father, a Kentucky farmer, Johnson lived a relatively free life until his father sold him, his mother, and his three siblings into slavery for $1,100. After an unsuccessful escape attempt, Johnson eventually sought freedom again during the Civil War, and escaped to Union Army lines in 1863. Soon after, he joined a black regiment and fought for the Union Army’s 102nd Colored Troops in South Carolina. After the war, he made his way to the U.S.–Ontario borderland near the Ogdensburg-Waddington area and worked as a stone mason and master builder. His story sheds light on the African American experience in the North Country and explores the depth of Johnson’s personal history, his work, and the architecture his career produced. This tour will include a talk by Professor Emeritus Cornel “Corky” Reinhart on his time unearthing the Isaac Johnson story. Tour the historic 1884 Waddington Town Hall, and travel to Ontario to explore two of Johnson’s finest buildings – the St. James Anglican Church in Morrisburg, Ontario and the Winchester United Pastoral Charge in Winchester, Ontario.

This tour is led by AARCH Staff and St. Lawrence University Professor Emeritus and Isaac Johnson scholar, Cornel “Corky” Reinhart. The tour begins at 10 am and ends at 4 pm. The tour fee is $50 for AARCH members and $60 for non-members.

*Note that all participants must have a valid passport or enhanced driver’s license to travel across the Canadian border.

Exploring Chazy, Tuesday, August 6 (Chazy): Philanthropist and businessman William Miner grew up in Chazy and made his fortune by inventing, patenting, and manufacturing specialized railroad equipment. In 1903, he and his wife, Alice, returned to the family’s Chazy farm and began more than three decades of innovative philanthropic work in the region. In this outing, we’ll explore two of the Miners’ most significant and lasting achievements: the Alice T. Miner Museum and Heart’s Delight Farm, now the Miner Institute. They established the museum in 1924 in a three-story stone mansion that was modified to house Alice’s collection of art and decorative objects. Heart’s Delight was an organizational and technological marvel in its day with 300 buildings on 15,000 acres, and 800 employees. In the twentieth century, the farm evolved into the Miner Institute which now focuses on pioneering agricultural research and livestock breeding, as well as providing educational programs in farm management and environmental science.

This tour will be led by Alice T. Miner Museum Director Ellen Adams and a team from the Miner Institute. The tour begins at 10 am and ends around 4 pm. The fee is $40 for AARCH members $50 for non-members.

Saranac Lake Pioneer Health Resort, Saturday, August 10 (Saranac Lake): The history and architecture of Saranac Lake is interwoven with the American health industry of the late 19th and early 20th centuries. One method of tuberculosis rehabilitation involved long exposure to the fresh, pure mountain air of the Adirondacks. As a result, Saranac Lake was fitted with cure cottages and sleeping porches built to accommodate this new style of treatment. In addition to caring for patients, state-of-the-art facilities were constructed for research, such as the first laboratory to study tuberculosis in the nation by Dr. Edward L. Trudeau. Explore this 1894 laboratory-now-museum, learn about celebrity patients, visit the grounds of the Trudeau Institute as well as the former Trudeau Sanatorium, and see several cure cottages including the simple cabin where Hungarian composer Bela Bartok poignantly spent his final summer. This tour is co-sponsored with Historic Saranac Lake (HSL), and will be led by HSL Executive Director Amy Catania. Admission is $45 and meet-up location and details will be given upon reservation confirmation.

Jeremiah Oosterbaan, Architect, Tuesday, August 20 (Plattsburgh): A third generation Dutch-American, Jeremiah Oosterbaan (1929-2011) trained as an architect at the Illinois Institute of Technology under Ludwig Mies van der Rohe, a pioneer of Modernist architecture. In 1956, Oosterbaan established a practice in Plattsburgh and over the next forty years designed some of the city’s most prominent and distinctive late 20th century buildings. AARCH’s own Steven Engelhart explains that “In an era when there was a lot of undistinguished architecture being built in the United States, Oosterbaan brought a deftness with form, textures, materials, massing, and design to his buildings and Plattsburgh is a much more beautiful city for his work.” This outing explores the best of his work, including the Temple Beth Israel, Newman Center, the Press-Republican building, Clinton County Government Center, St. Alexander’s Catholic Church, and his former personal residence.

This tour will be led by AARCH Executive Director Steven Engelhart, and will begin at 10 AM and will end at 3:30 PM. The fee is $45 for members and $55 for non-members.

200 Years of Farming, Thursday, August 29 (Peru/Keeseville): For more than 200 years, apples, cheese and butter, grain and corn, vegetables, oxen and dairy cows have been grown, managed, cultivated, and raised in the Champlain Valley. Embark on an agricultural adventure through southern Clinton County to explore a range of homesteads, Century Farms and barns dating from the early 19th century up through today. Get a farming introduction at the Babbie Rural and Farm Learning Museum before touring historic and active farms, such as the Keese Homestead, Remillard Farm, Forrence Orchards, and North Country Creamery. See animals, walk an orchard, sample products and savor the flavors of our Lake Champlain bounty. Round out the day with a visit to the Ausable Brewing Company for a frosty local beverage and sample locally-made tacos from the Mace Chasm Farm food truck (optional).

This outing will be led by AARCH Executive Director Steven Engelhart, and begins at 10 am and ends at 4 pm. The fee is $45 for AARCH members and $55 for non-members.

For further details or to register for any of these tours, call the AARCH office at (518) 834-9328, or email Educational Programs Director Nolan Cool at nolan@aarch.org.