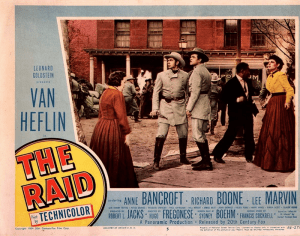 Plattsburgh based film preservationist and archivist Andy MacDougall will co-host two screenings of his personal 16mm print of The Raid on Friday and Saturday, July 19th and 20th at 7 pm at the Clinton County Historical Museum, 98 Ohio Ave, in Plattsburgh.

During the Civil War, what is today known as a secret “terror cell” was briefly established in the North Country by Confederate soldiers. The 1954 20th Century Fox motion picture The Raid is based on this event and opens with a prison break in Plattsburgh by Confederate prisoners who, after escaping across the Canadian border, plan to rob banks in St. Albans, Vt., and set fire to the town.

The movie stars Van Heflin, Anne Bancroft, Richard Boone, Lee Marvin, Peter Graves, and Tommy Rettig (the “Lassie” kid). The real life St. Albans Raid happened on October 19, 1864, and is one of the most northernmost engagements of the Civil War. One person was killed and one wounded, in three simultaneous bank robberies that netted the Confederates what would be more than $3 million today – less than half was recovered.

Confederate agent George Sanders and Lieutenant Bennett Young masterminded the raid. It’s said Young mounted the steps of a St. Albans hotel and shouted: “This city is now in the possession of the Confederate States of America!”

The St. Albans Raid was commemorated in 1914 by a Vermont Historic Marker in front of Taylor Park in St. Albans and a plaque at the entrance of what was then the Franklin County Bank, the only one of the three banks robbed that day which remains a bank.

The movie takes creative license, including changing the year and precise reason for the raid.

The screenings are free and open to the public. Donations are welcome and refreshments will be served.

More information is available on the Clinton County Historical Museum’s website, or by calling (518) 561-0340.