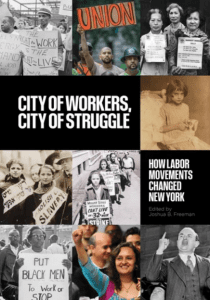 The new book City of Workers, City of Struggle: How Labor Movements Changed New York (Columbia University Press, 2019), edited by Joshua B. Freeman looks at the working people have helped create and re-create the City of New York through their struggles, from the founding of New Amsterdam until today.

Starting with artisans and slaves in colonial New York and ranging all the way to twenty-first-century gig-economy workers, this book tells the story of New York’s labor history anew.

City of Workers, City of Struggle brings together essays by leading historians of New York and a wealth of illustrations, offering rich descriptions of work, daily life, and political struggle. It recounts how workers have developed formal and informal groups not only to advance their own interests but also to pursue a vision of what the city should be like and whom it should be for.

The book goes beyond the largely white, male wage workers in mainstream labor organizations who have dominated the history of labor movements to look at enslaved people, indentured servants, domestic workers, sex workers, day laborers, and others who have had to fight not only their masters and employers but also labor groups that often excluded them.

City of Workers, City of Struggle offers an accounting of the four-hundred-year history of efforts by New York workers to improve their lives and their communities.

Author Joshua B. Freeman is Distinguished Professor of History at Queens College and the Graduate Center of the City University of New York. His books include Behemoth: A History of the Factory and the Making of the Modern World (2018); American Empire, 1945–2000: The Rise of a Global Power; the Democratic Revolution at Home (2012); and Working-Class New York: Life and Labor Since World War II (2000).