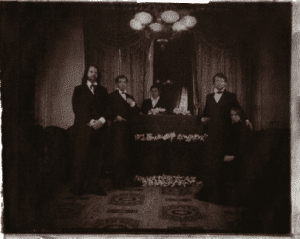 In March 1865, family patriarch Seabury Tredwell died in his upstairs bedroom; his wake and funeral were held in the double parlor, shrouded in black crepe. Grief was not unique to the Tredwell family that year.

More than 600,000 Americans had died by the end of the Civil War, and with the assassination of President Abraham Lincoln, the nation plunged into a period of unprecedented public mourning.

The overwhelming sense of grief and loss led to heightened interest in Spiritualism, as survivors attempted to contact their dearly departed through séances and mediums.

On September 26, 2019, the Merchant’s House Museum of New York will unveil a new exhibit, Death, Mourning, and the Hereafter in mid-19th Century New York. The  exhibition explores 19th century customs and attitudes surrounding death and mourning through the eyes of the Tredwell family, who occupied the row house-turned-museum for nearly 100 years.

Visitors are invited to pay their last respects at Seabury Tredwell’s deathbed upstairs, then join in the mourning in the double parlor, staged with a coffin and veiled in black, for his wake and funeral.

Poignant scenes throughout the house explore 19th century customs surrounding death, a time, unlike today, when death and mourning were pervasive and integral parts of life; dying and funerals took place at home; rituals of mourning helped the bereaved cope with the ever-present anguish of death; and Spiritualism offered hope of a Hereafter.

Special items from the museum’s expansive costume collection will also be on display throughout the house: two 19th century mourning dresses, likely worn by one of the younger Tredwell sisters after the death of their older sister Mary Adelaide Tredwell Richards in 1874, and an assortment of hair jewelry.

The exhibition will run through November 4, 2019 and is included with regular museum admission. The Merchant’s House Museum is located at 29 East Fourth Street, New York. More information is available on the Merchant House Museum’s website.