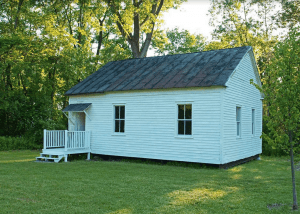 The Ichabod Crane Schoolhouse was initially constructed in 1850 at the intersection of Route 9H and Fisher Road as the District #6 Schoolhouse for the town of Kinderhook.

Although the structure was moved just 200 yards from its original location in 1974, it remains an excellent and intact example of a rural, one-room schoolhouse with a gable roof, clapboard siding, and a single pent-roofed entrance.

The interior consists of a large classroom with two adjacent cloakrooms – one for boys, and one for girls. The building was never modified to have heat or hot water and still retains its original 1929 wood burning stove, wood flooring, chalkboards, and double-hung sash windows. Several condition issues are present that must be addressed in the near future: the condition of the metal roof and the stability of the structure, as the building still rests on the steel girders that were used to move it in the 1970s.

Columbia County Historical Society (CCHS) is one of this year’s Preserve New York (PNY) grantees. Their grant of $10,000 will allow the CCHS to work with Walter Wheeler of Hartgen Archaeological Associates to complete a Historic Structure Report (HSR) of the Schoolhouse.

The HSR project is expected to assess the current condition of the building, make recommendations for repair and restoration and serve as a guiding document for continued interpretive use and future preservation. The schoolhouse is not currently listed on the State and National Registers of Historic Places, and the Historical Society hopes that the research provided through the HSR process will create a strong case for a future nomination.

The 2019 PNY grant cycle was the most competitive in the program’s 26-year history. An independent jury met in June to review over 70 applications. After two days of deliberations, $262,498 was awarded to 31 projects across 25 counties.

Since 1993, the Preserve New York grant program has been providing funds to municipalities and nonprofit organizations that need technical, professional assistance to guide a variety of preservation projects. The historic structure reports, building condition reports, cultural landscape reports, and cultural resource surveys that are funded through this program can have profound impacts on the sites they are studying.

With the announcement of the 2019 awards, support provided by PNY since its launch totals more than $2.8 million to 438 projects statewide. The Preserve New York grant program is made possible by the New York State Council on the Arts (NYSCA).