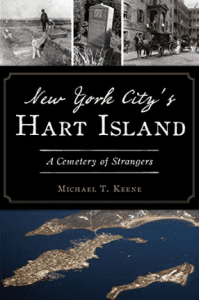 Michael T. Keene’s new book New York City’s Hart Island: A Cemetery of Strangers takes a look at Hart Island, where more than one million bodies are buried in unmarked graves, just off the coast of the Bronx in Long Island Sound.

The islands first public use was as a Civil War prison and United States Colored Troops training site and later a psychiatric hospital. The island became the repository for New York City’s unclaimed dead. It’s mass graves are a microcosm of New York history, from the 1822 burial crisis to casualties of the Triangle Shirtwaist fire and victims of the AIDS epidemic. Important artists who died in poverty have been discovered buried there, including Disney star Bobby Driscol and playwright Leo Birinski.

Michael T. Keene is the author of eight books about unusual but true stories. He is also the producer of the documentary video Visions: True Stories of Spiritualism, Secret Societies, and Murder, as well as eight audio books. Although employed for more than twenty-five years as a financial advisor, Keene has combined his interest in local history, writing, music and filmmaking to explore unique and fascinating chapters of nineteenth-century New York history and stranger-than-life legends.