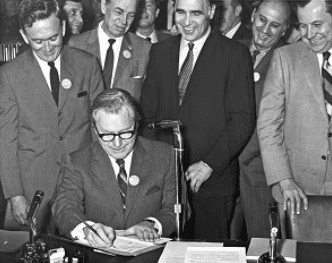 The New York State Department of Environmental Conservation (DEC) was established in 1970 on the first-ever Earth Day.

Since 1970, the number of seriously polluted waters in the state has fallen dramatically. So has sulfur dioxide pollution (acid rain). Most outdated and poorly located landfills have closed and our water has been largely cleaned-up through waste-water management. Bald Eagle have returned, as have peregrine falcon, ravens, and osprey. Wild turkey hunting has returned to the Adirondacks, as have native trout. Beaver, fisher, and otter are flourishing. In 1970, there were no Moose in the Adirondacks.

For DEC’s 50th Anniversary the agency will be hosting a year-long celebration in 2020.

In a statement to the press, DEC Commissioner Basil Seggos said, “For 50 years, New York State has set the national standard for environmental excellence by advancing ambitious and proactive policies to protect the planet. Established on the first Earth Day in 1970, the Department of Environmental Conservation has played a leading role in nearly every environmental milestone in New York’s history, including the recovery of the Bald Eagle, the first statewide fracking ban, and the largest addition to the Adirondack Park in more than a century, completed in 2016. This year, while we reflect on five decades of victories, we will urgently direct our attention to the challenges of the next 50 years, particularly climate change, the greatest-ever threat to our air, land, and water. As Washington, D.C., abandons environmental protection and sides with polluters, DEC is committed to taking on the challenges ahead.”

Starting in January, DEC will highlight its history of environmental victories on the agency website, via email, social media channels using the #DEC50 hashtag, and in the Conservationist Magazine and Conservationist for Kids. In addition, beginning in January and continuing throughout the year, DEC will host anniversary events and announce staff-led service projects across the state.

A commemorative logo is expected to be used on the DEC website, in printed materials, and other promotions throughout 2020. DEC’s Division of Fish and Wildlife is incorporating the DEC 50 logo in the yearly Habitat Access Pin to commemorate the anniversary. The new Habitat Access Pin will be available at license issuing agents statewide beginning in August.

DEC is also planning to launch a new Geocaching Challenge. DEC will designate 50 properties across the state where geocaching canisters will be hidden with information inside on how to receive a prize.

For the latest updates on #DEC50 and DEC’s year-long celebration of its 50th anniversary, visit DEC’s website.