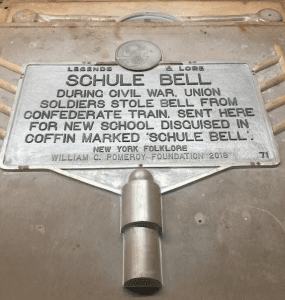 An intriguing piece of North Country folklore with Civil War origins will be featured on the 1,000th historic roadside marker funded by the William G. Pomeroy Foundation, a private grant-making foundation based in Syracuse, NY.

Passed down for generations, this local lore describes an inventive plot carried out by a few Union soldiers in Virginia. Under the cover of night, the soldiers snuck to a derailed Confederate train and made off with its bell. They hid their acquisition inside a coffin labeled “Schule Bell” and successfully sent the rigged casket to Theresa, NY, where one soldier had family ties and knew the community needed a bell for its schoolhouse.

Now, Town of Theresa has received a grant from the Pomeroy Foundation to obtain a roadside marker that will feature the “Schule Bell” story. The marker, which is currently in production, is part of the Foundation’s Legends & Lore Marker Grant Program. The Pomeroy Foundation, which helps people celebrate their community’s history, provides grants that cover the entire cost of a marker, pole and shipping.

“Legends like this will die with the older generations unless they are preserved,” says Timothy S. Minnick, Town of Theresa Historian. “The Town of Theresa has a rich Civil War history, which this marker will help commemorate. Now the story will live on long after we’re gone.” Minnick says the “Schule Bell” marker will be installed near a Civil War monument in the town’s Oakwood Cemetery. The monument was built by local Civil War veteran August Kissell. The bell itself has been housed in the Theresa Primary School (formerly Theresa High School) since 1938.

“At the Pomeroy Foundation, we have seen firsthand the benefits and impact markers have on communities,” says Deryn Pomeroy, Trustee and Director of Strategic Initiatives for the Pomeroy Foundation. “Markers help preserve history, educate the public, encourage pride of place and enhance historic tourism. We are proud to support the Town of Theresa and all those over the years who have done great work to recognize their history or folklore through our marker programs. Funding our 1000th marker is an exciting moment, especially as we celebrate the Foundation’s 15th anniversary this year.”

Plans are underway for a “Schule Bell” Legends & Lore marker dedication, with details to be announced at a later date. Lowe’s Home Improvement in Watertown donated materials (landscaping stones, mulch, soil, flag and flag pole) to help beautify the area around the monument and marker at Oakwood Cemetery.

New York Folklore is the Pomeroy Foundation’s Legends & Lore partner in New York State and originally helped to found the program in 2015.

“The Schule Bell story of how some creative individuals ‘hoodwinked’ Confederate troops and shipped a heavy bell to Northern New York, falls into the classic ‘trickster’ type of story in which wits and guile are used to effect a good outcome,” says Ellen McHale, New York Folklore Executive Director. “The Schule Bell story is just one example of the many important pieces of local lore and history often known only within a specific locale. The Legends & Lore marker program provides a wonderful opportunity for communities to share those types of unique stories to reach a wider public audience.”

More information about the Pomeroy Foundation is available on their website.