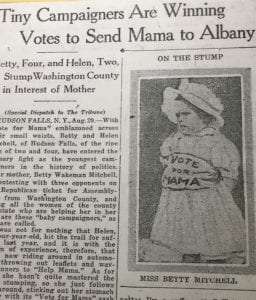 The Post-Star of Glens Falls received first-hand accounts of the 1920 Republican National Convention from Washington County suffragist Betty Wakeman Mitchell, who had a choice seat in Section 70 of the Chicago Coliseum, where she could hear the nominating speeches.

Two years earlier Mitchell had run unsuccessfully in a Republican primary for the state Assembly seat representing Washington County (once the home of Susan B. Anthony).

“There was much routine the first two days of the convention and we had time for visiting,” Mitchell said in a series of telegrams and interviews cited in Post-Star reports over several days. “After that we sat for hours in the sweltering heat, too excited to know it was hot.” Mitchell, of Kingsbury, was not a delegate.

She was at the convention to network with national suffrage leaders as the emphasis changed from getting the vote for women to getting out the woman vote. The 19th Amendment, guaranteeing women the right to vote, would be ratified on August 20. In New York, women won the right to vote in 1917.

The excitement began even before Mitchell reached Chicago. “From the time we left the Grand Central Station on the New York Special, things began to hum,” she said. “On the train there were eight candidates for governor and one for comptroller.”

Herbert Hoover, who key leaders in both major political parties had attempted to draft for President that year, also was on the train. “Hoover made a hit,” she said.

Mitchell was “an ardent admirer and booster” of General Leonard Wood of New Hampshire, a front runner going in to the convention.

Wood followed the model of 1916 Republican nominee Charles Evans Hughes, a Glens Falls native, in setting up a women’s campaign team. “Mrs. Douglas Robinson, in seconding the nomination of General Wood, made the most thrilling speech of all,” Mitchell said. “She is so like her brother, Colonel (Theodore) Roosevelt.”

Wood and Gov. Frank Orren Lowden of Illinois were deadlocked on early ballots. “General Wood and Mr. Lowden proved to be too popular,” Mitchell said.

Compromise candidate Warren Harding, a U.S. senator from Ohio, won the nomination on the tenth ballot. “His (Harding’s) nomination was said to be the most safe and sound and his friends say the longer we know him the better we’ll like him.” Mitchell arrived back in Hudson Falls on June 14.

“It’s good to be back in Hudson Falls and catch my breath. – The last week seems just a dizzy whirl.”

Harding went on to win the election against Democrat James Cox, the Ohio governor, who won his party’s nomination on the 44th ballot.

Mitchell, no doubt, played a role in Harding carrying Kingsbury, her home town, in the general election 1,198 to 817, the largest vote ever given to a presidential candidate in the town, up to that point.