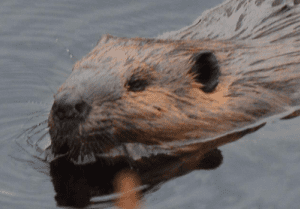 Beavers are the great architects of American ponds and streams. The North American beaver competes with the Eurasian beaver to be the 2nd largest rodent in the world, after another semi-aquatic mammal, the South American Capybara.

The average weight of a beaver in New York State is 42 lbs, though 60 pounders are not that unusual. Beavers have an average body length of 2 and ½ feet to 3 feet, and a flat swimming rudder tail of 8 to 14 inches. The tail doubles as a warning device, used to loudly slap the water when predators, dogs or people are sighted.

Beavers can stay under water for about 15 minutes, with their ears and nostrils sealed, and can live to be twenty years plus.

Powerful rear paws are webbed to assist in swimming, while the front paws are clawed to enable digging and dexterous handling of wood, from twigs and sticks in building dams and lodges, to assisting the jaws in manipulating trees. Beaver incisors never stop growing, and are self sharpening. The outer edge of the incisor is coated with hard enamel, while the inside is softer and wears down, keeping the cutting edge super sharp. Powerful jaw muscles are the engine that enables the beaver to cut into tree trunks.

Nictating membranes act as underwater goggles for the beaver, while scent glands near the genitals secrete castoreum, which the beavers use to waterproof their coats, as well as build scent mounds to mark their territory. Another set of oil glands secrete unique chemical identifiers in the form of waxy esters and fatty acids, allowing beaver to differentiate their own odor from those of other beavers within their territories.

The more scent mounds beavers build along their dams, the less receptive will wandering beavers find a well-marked territory. As a corollary, resident beavers become more familiar with scent of beavers in neighboring territories, and less aggressive in defending their territories against them, than they would be with unfamiliar outsiders. In addition, young beavers generally do not disperse great distances, so neighboring beavers are often related to each other.

A thick layer of fat under the skin insulates the beaver against the cold winter water and air temperatures. Bergman’s Rule describes why mammals at more northerly latitudes and/ or higher elevations tend to be larger on average than their counterparts in warmer areas, as larger animals retain their body heat longer under more strenuously cold conditions, and therefore live longer to reproduce and pass along those genes for greater size. That’s why beavers, bears, moose and wolves in Alaska are about 10% larger on average than they would be in Yellowstone. 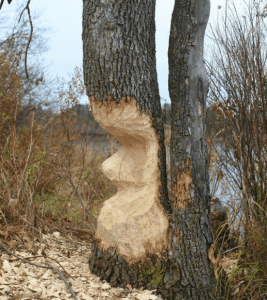 Beavers eat leaves, roots and bark from aspens, birch, alder, willows, maples and poplar trees, preferring trees less than six inches in diameter, and even then, eat mainly the softer green cambium layer found under the bark, that part of the trunk which grows and adds girth to the trunk. Beaver also eat aquatic plants like water lillys.

More than any other mammal, the industrious and hard working beavers have the greatest impact on water bodies, with their tree harvesting, manipulation and dam building. The purpose of dam building is to create lakes or ponds of sufficient depth to allow beavers underwater access to their lodges if and when the water surface freezes in winter, as well as to keep predators like wolves, coyotes, cougars or bears from approaching or breaking into the lodge for access to the beavers.

Lodges are constructed of mud and sticks, and can be as large as 8 feet wide by 3 feet tall inside, Large lodges can house up to ten beavers. Lodges are located on pond or river banks, or more securely, out on small islands, just above water level, and often with multiple underwater entrances, protected from freezing by the warmth of the lodge. The thick, outer shell of the lodge will freeze, frustrating digging wolves who approach over the ice. The main beaver lodge at the Adirondack Wildlife Refuge is along the West Branch of the Ausable river bank, outside the Otter Slough.

It is the sound of running water which compels beavers to dam, which is why clever contraptions like beaver deceivers allow the silent flow of water, by acting like a surface drain to allow overflow into adjacent water areas. Beavers have been trapped and skinned for hundreds of years, as the value of their pelts rose and fell, to feed the market demand for their incredibly soft fur, which is comprised of coarse outer hairs and short, fine inner hairs. Only state and provincial regulation of trapping with licenses and seasons have kept the beaver from being trapped out. 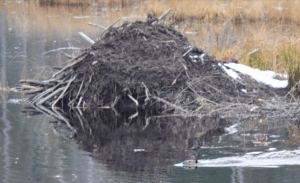 At the same time, beavers have been used out west as hedges against drought to build holding ponds to ensure enough water for the livestock whose overgrazing destroys much of private and taxpayer owned land from BLM land to US Forest Service land.

Beaver ponds naturally produce a huge and beneficial support habitat for everything from invertebrates, fish, crayfish, frogs, newts, snakes and turtles to predators like otters, minks, weasels and bears, as well as osprey, eagles, ducks, geese, etc. so the same factors which seem to make beavers a headache for farmers and land owners, provide a rich biodiversity for the flourishing of a wide range of plants, crustaceans and animals. Beaver ponds act as one of nature’s best filters, removing sediments and pollutants from water, including total suspended solids, total nitrogen, phosphates, carbon and silicates.

They also provide game for hunters and fishermen, and a place to drink for deer and other mammals like moose, who browse the sodium rich water plants, often diving beneath the water surface to access the plants. Car accidents with moose are usually caused by moose coming up onto the road to lick the salt we spray around to melt the ice.

If the aim of trapping beavers is to eliminate them, trapping backfires because the same habitat which attracted the beavers in the first place, will attract other beavers, who will rebuild the dams and infrastructure. This is why beaver deceivers are such a useful invention, as they preserve the beaver’s habitat, and all of its benefits, while preventing too many acres from being absorbed into the beaver’s habitat. Working with the beavers is generally a win-win for all parties.

Beavers are family animals, with a monogamous pair which mate for life. Similar to a wolf pack, beavers have a breeding pair and the rest of the pack is comprised of two to three generations of pups. The older members of the group help care for the youngest pups, support feeding and protecting the family, and defending the territory.

Beavers in the Adirondacks mate between January and March, with a gestation period of about 105 days. Pups stay with Mom and Dad about two years, and often disperse locally, in effect, setting up territories as buffers around their parent’s territories. The beaver is a critical keystone animal, because of the way in which their activities reverberate through habitat in support of many other species.

Photos from in Algonquin Park by Steve Hall.