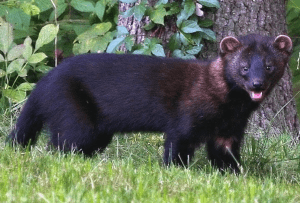 Whenever the subject of fishers comes up, you hear they’re mean, nasty and vicious – a smaller wolverine with attitude. Fishers get a pretty bad rap, but when they do, there’s a great deal of projecting and anthropomorphizing going on.

Fishers aren’t mean or evil, and they don’t really eat many house cats at all.

What members of the mustelid family (the weasels) are is uncompromisingly aggressive, which is why they are such efficient and successful hunters, from the wolverine to the fisher and marten to the ermine and weasel. I also believe they get blamed for acts which they are not responsible for. Great horned owls, for example, have smaller territories than fishers and are probably much more likely to take your cat.

The ancestors of fishers appear in North America between two and a half to five million years ago. Individual remains from 125,000 years ago, show no significant anatomical differences from modern day fishers.

Fishers are meso predators who defend and scent mark territories of about three square miles in summer, and five in winter. They prefer mature conifer forests with good cover, large trees and fallen logs with hollows for denning. Fishers may also den under bushes or in crevices. Fisher territories often overlap, and like cats, are frequently patrolled using shared, common routes. Male fishers have slightly larger territories, which overlap female territories, making it easier to find females for mating.

Fishers are seasonally brown to dark brown to mottled in summer, with moulting between summer and winter. Male fishers average three to four feet long, and can reach 8 to 13 pounds, females about half that. Despite the sometimes common name “fisher cat,” fishers are not cats, nor do they eat much fish, even though they are great swimmers, as well as climbers.

Fishers have small round ears to prevent heat loss, and broad, blackish five-toed feet featuring retractable claws, which act as snowshoes. Their ankles have a rotating capability of 180 degrees, which makes them very nimble in trees, even allowing them to run down trees head first. Their rear foot pads have a central scent gland, which may assist in marking territories, and in finding other fishers during mating season.

Contrary to popular lore, fishers don’t flip porcupines to attack the belly. It’s way too dangerous a strategy. Rather the swift and shifty fisher attacks the porcupine’s face with a series of quick bites, sort of like Muhammed Ali jabbing an opponent relentlessly to discourage them and weaken their resolve.

One surprising find from a study in Maine led by Scott McKlellan, Maine Department of Inland Fisheries and Wildlife, indicate that fishers will occasionally attack the much larger Canadian lynx, often in snowy weather, when the lynx may be taken by surprise, such as laying out a storm. Tracks in the snow, and the distance between canine punctures found post mortem on the lynx head, throat and neck tell the story. It appears that the fisher seizes the lynx and tenaciously holds on until the cat suffocates. 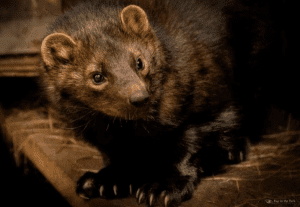 Surprisingly, the victims were not adult lynx weakened by starvation, as there were sufficient numbers of their favored prey, snowshoe hare, in lynx habitat at the time, and the lynx remains did not show anatomical signs of starvation. Fishers appear to have less luck with bobcats, and often end up as their prey.

Male fishers have little to do with females, except during mating season. Female fishers, like bear sows and about 100 other mammals, feature delayed implantation, which means that the blastocysts don’t implant in the uterine wall after mating, delaying pregnancy, and insuring the female will deliver one to four kits in spring, who will stay with her through summer. The female will again go into estrus in April or May, a couple of weeks after giving birth, thus starting the cycle anew.

Fishers have been trapped out and extirpated from many regions more than once, as the sale value of pelts rose and fell. Fishers are on a strong comeback in New England, maybe due in part to the increase in porcupines there, an important prey animal. The fisher and marten trapping season in the Adirondacks is in November. (I hope non-target animals have their calendars marked.)