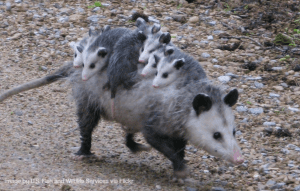 The opposum is the only marsupial living in North America, and they’re one of the oddest-looking, slowest moving mammals around.

They’ve become sort of a folk hero in America, because of their penchant for annually devouring an average of 5,000 of the lyme bacteria carrying black legged ticks, which make the mistake of hitching a ride on the the possum’s low slung body.

The ticks can pick up the borellia burgdorferi lyme disease bacteria and then infect other mammals, such as you, your dog or your horse. Unfortunately for the ticks, and contrary to the possum’s disheveled appearance, they are great groomers, and may harvest up to 90 percent of the ticks who climb aboard.

Possums have been around for an astounding 70 million years, so their ancestors were there to commiserate with the dinosaurs of the Cretaceous who got zapped by the meteor which slammed into the Gulf of Mexico. At the same time possums live very short lives, typically two to three years, partly thanks to predators like dogs, cats and people. Their reproduction rate makes up for this, with a 12-day gestation period, and large litters of 5 to 13. They’re more intelligent than your dog or cat, and possibly as smart as your pig. 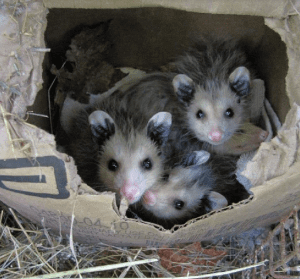 The young are tiny, barely a gram and a half, hairless and pink, and they’re called joeys. They spend about two months in their mother’s pouch, their mouths literally stuffed with a milk swollen nipple, afterwards growing large enough to get off the nipple, and graduating to clinging to her back as she moves about.

The young themselves are sexually mature at six months. Possums are prolific, often mating twice a year and delivering litters in February and July. Females have two vaginal tracts, which the males match with a bifurcated penis. As if that were not odd enough, possums have those tiny pink feet, each of which has opposable thumbs.

The opossum is a museum exhibit of extremely strange and disjointed features. It has 50 teeth, the most of any mammal, and it is resistant to rabies and most toxins (such as snake bites). Pity the poor rattler, copperhead or moccasin who bites a possum, only to have the possum turn the tables and eat the snake!

Possums have a low body temperature, which gives them a great immune system, and makes them resistant to viruses. Their tails are prehensile and can be used to drag leaves and sticks home to the nest, or to hang for brief periods by their tails from tree branches.

Possums may growl or hiss when confronted, but they appear to play dead when seriously stressed or threatened by predators. However, before you start nominating them for academy awards, the process seems to be involuntary. The possum faints, slouches to his side, with his mouth open, causing his tongue to loll outside the mouth, and his anus emits an odor so repugnant, it draws flies and dissuades would be diners, who depart in disgust. Even their heart rate and respiration slows down.

Possums are very beneficial, as they’re one of nature’s greatest sanitation engineers, eating practically everything from insect pests to moles and shrews, snails and slugs, worms and snakes, frogs, birds, fruits, nuts, our leftovers and carrion. They may resemble large rats, but they are not related, and do eat both rats and mice.

They also live anywhere, in tree cavities, under porches, in basements, attics and garages. They’re not much at digging, so they often take over abandoned burrows. They have great memories for where food is located or stored, and they’re very social with other possums, without being territorial about it.

If you live in an area infested with ticks, you can’t have a better neighbor than a possum. Climate change is encouraging some possums to brave the North Country, but these non-hibernators can have difficult winters. Our species of possum is the Virginia opposum.

Just like humans and other creatures, It is possible for some opossums to carry diseases, such as leptospirosis, tuberculosis, relapsing fever, tularemia, spotted fever, toxoplasmosis, coccidiosis, trichomoniasis, and Chagas disease caused by a parasite.

The opossum and a parasite, Sarcocystis neurona, have been implicated in Equine Protozoal Myeloencephalitis, a neurological disorder in horses, although current research suggests other hosts (such as raccoons and skunks) and parasites.

All in all, opossums probably carry far fewer zoonotic diseases than other critters, and probably make up for it in their heavy impact on disease carrying ticks.

Photos, from above: Possums courtesy US Fish and Wildlife and immature joeys by Steve Hall.