Have your exhibit noticed on The New York History Blog by following the submission guidelines HERE.

The National Park Service is welcoming visitors to the new newly renovated Edison Laboratory Complex at the Thomas Edison National Historical Park in West Orange, New Jersey. According to the site’s Superintendent Greg Marshall, “The original music recording studio, Thomas Edison’s private laboratory, and a photography studio will be open to the public for the first time in the history of the site.”

The renovation was a complex project to preserve the historic buildings and the artifact and archival collections at the Laboratory Complex and Glenmont Estate. The original historic furnishings and documents were beginning to deteriorate because of lack of adequate heating and cooling systems. They were at risk of loss or damage from fire because of old, outdated alarm and sprinkler systems. The vast majority of the artifact collection was inaccessible to visitors and researchers while stored on the upper floors of the historic main laboratory.

The original furnishings have been moved back into many rooms and the unique museum collections will be available to see, hear, and experience. Installation of a new elevator and stair tower adjacent to the main laboratory building allows new public access to the upper floors of the laboratory that now feature new exhibits. The Edison home at the Glenmont Estate has also been renovated. Other improvements include new fire detection system and upgraded fire sprinkler system, new heating and cooling systems, and exterior building repairs and an integrated drainage system.

Thomas Edison National Historical Park is a unit of the National Park Service that preserves and interprets the West Orange Laboratory and Home of inventor Thomas Alva Edison. Information is available at: www.nps.gov/edis.

The Edison Innovation Foundation is a nonprofit organization that supports the Edison Legacy and encourages students (including women and minorities) to embrace careers in science, technology and engineering and is committed to educating the next generation of great innovators while using Edison and his Invention Factory as the foundation. For information on the Foundation, visit: www.thomasedison.org. 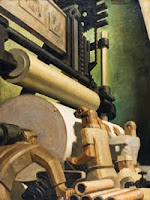 The Hyde Collection in Glens Falls, NY has announced that it has received a gift of a 1934 oil painting by Douglass Crockwell (1904-1968) entitled “Paper Workers, Finch Pruyn & Co,” from Mr. and Mrs. Samuel P. Hoopes, of Bolton Landing, New York.

Douglass Crockwell was a founding trustee of The Hyde Collection, acted as its first director, and was famous for his illustrative paintings for such national publications as the Saturday Evening Post, Life, Look, and Esquire. His commercial illustrations were commissioned by such manufacturing and industry giants as General Electric, General Motors, Coca Cola, and Standard Oil. Crockwell lived and worked in Glens Falls from 1932 until his death in 1968. END_OF_DOCUMENT_TOKEN_TO_BE_REPLACED

This Saturday, September 26, 2008, nearly 100 museums in New York State will participate in Smithsonian magazine’s fifth annual Museum Day. Museum Day is an opportunity for museums and cultural institutions nationwide to open their doors free of charge. A celebration of culture, learning and the dissemination of knowledge, Smithsonian’s Museum Day reflects the spirit of the magazine, and emulates the free-admission policy of the Smithsonian Institution’s Washington, D.C. – based museums.

Last year, more then 200,000 people attended Museum Day. All fifty states plus Puerto Rico were represented by 900 participating museums. This year, the magazine expects to attract over 1000 museums. Established New York institutions like the New York State Museum, the Adirondack Museum, the Cooper-Hewitt National Design Museum, Museum of the City of New York, The Museum at Bethel Woods, The Iroquois Indian Museum, and more, will all take part this year. A complete list of New York museums that are participating is located here.

Beginning tonight, there will be a series of events, lectures, and an exhibit realting to aspects of the Collegiate Church. The events feature an exhibit about far east trade curated by Marybeth dePhilippis of New-York Historical Society, lectures on Everardus Bogardus (1607-1647) (the second minister of the Dutch Reformed Church in New Amsterdam), the role of women in 17th Century Dutch culture, the archeology of new Amsterdam, and Leisler’s Rebellion and the Collegiate Church. The West End Church and the Marble Collegiate College were both founded in 1628 by Dutch settlers.

Lecture: (September 24 at 6 p.m.) “A Dutch Mystic in the New World: Reverend Everardus Bogardus (1607-1647) and His Callings”. The second minister of the Dutch Reformed Church in New Amsterdam, Bogardus will be reprised by Prof. Willem Frijoff, Emeritus professor of history at Free University (Amsterdam) who has written the definitive biography of Dominie Bogardus, and Dr. Firth Haring Fabend, fellow of the Holland Society and author of Zion on the Hudson (about the Reformed Church after the English occupation).

Lecture: (October 1 at 6 p.m.) “Women of the Dutch Golden Age”, a talk on the role of Women in 17th Century Dutch Culture by Els Kloek, Associate Professor at Utrecht University and editor-in-chief of Dictionary of Dutch Women.

There will be an opening reception of the Haverstraw Brick Museum’s new exhibit, Moving Bricks on the Hudson, on September 20, 2009 between 1 and 4 pm at the museum at 12 Main Street in Haverstraw, Rockland County, New York. In celebration of the Hudson River and the Hudson Fulton Champlain Quadricentennial, the exhibit highlights sloops, schooners, towboats, tugs, and barges that transported bricks on the Hudson in the 19th and early 20th centuries. At its peak the brick industry was the dominant industry on the Hudson River and diverse boats carried one billion bricks annually. Visitors will learn about the brick boats and their boatmen and women, the dangers of river transport, and the shipyards that built and repaired the “brickers.”

The exhibit was inspired by the donation of the papers of the Reilly & Clark brick company to the museum. This collection, along with documenting the manufacturer, contains extensive records for the schooners that carried the firm’s bricks to market between 1885 and 1905. Items range from hundreds of receipts for tows, dock fees, and night watchmen to detailed accountings of the number of bricks carried each trip. The exhibit’s curator, T. Robins Brown, has a personal connection to cargo-carrying sailing ships as her great-grandfather, William T. Robins, was the owner and captain of the schooner Ella Worden on the Chesapeake Bay.

Moving Bricks on the Hudson is open on Sunday, September 13 from 11 am to 4 pm for the Annual Haverstraw Street Fair and until January 31, 2010 during the museum’s regular hours Wednesdays, Saturdays, and Sundays from 1-4 pm. It is also open by appointment by calling 845-947-3505 or emailing haverstrawbrickmuseum.org.

The mission of the Haverstraw Brick Museum is to collect, preserve, research and exhibit materials and cultures of the brick making industry within the Hudson River Valley.

Photo: On Minisceongo Creek, a “bricker,” a brick-carrying schooner, awaits its cargo of bricks from the Shankey brickyard. On board are brickyard workers as well as the brick boat’s crew. The two women, the wives of the captain and first mate, were likely part of the boat’s crew. They lived aboard and cooked, watched tides, pumped bilge water, and performed other tasks that required less strength. Photograph from de Noyelles, Within These Gates.

Throughout the fall semester SUNY Albany will be marking the 400th anniversary of Henry Hudson and Samuel de Champlain’s voyages of exploration with a three-part Hudson 400 program that includes an art exhibition, a “talks and concert” series, and a conference. The formal kick-off occurs tonight (September 15) from 5 to 7 p.m., at the University Art Museum. The museum will hosts the opening reception of “Uncharted” a new exhibit featuring works from ten artists inspired by themes of travel and discovery. To view the entire Hudson 400 program visit: http://www.albany.edu/outreach/hudson_400/hudson_400_events.html

As part of the 400th Anniversary of Henry Hudson’s sail of discovery, the Alan Klotz Gallery, (511 West 25th Street, NYC) is presenting Seeing the Hudson, a major exhibition of paintings and photographs, which show the river over a period of more than 200 years, from its source in the Adirondacks, to its mouth, 315 miles away in Upper New York Bay. The exhibition will take place September 17th – October 31st, 2009 with an opening reception on Thursday, September 17, from 6 to 8 pm.

The show begins with work by the 19th century painters of the Hudson River School, arguably the first American art movement, and continues through more contemporary painting and photographs. The exhibition demonstrates the variety of faces that the River presents and the selected works reflect the vision of the individual artists.

In general, 19th century Hudson River School painters saw the River as an almost holy, pristine, primeval landscape, where settlers (if present at all) lived in harmony with an all powerful “Nature“. Photographers (partially due to the nature of their medium) were more interested in the real than the ideal. To them, the profound effect of the “hand of man“ on the environment is what gave proof of man’s dominion over Nature, and was itself a source of pride for a developing nation. Of course, in more recent times, man’s impact on the environment has engendered a more negative judgment. Irony and severe criticism have become part of the view as a spur to environmental action by those who love the River and want to protect, defend, and restore it. All these motivations find form in the exhibition. 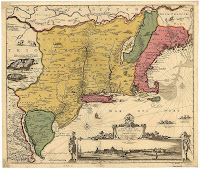 Another exhibit will mark the 400th anniversary of Henry Hudson’s arrival in New York harbor, this one running September 13, 2009 – January 3, 2010. This exhibit, however, is a once-in-a-lifetime event. Many, if not most, of the documents included in the exhibition have never been shown publicly in this country. Some have never been exhibited at all. At the close of the exhibition, most will be returned to archival storage and will not be seen again. END_OF_DOCUMENT_TOKEN_TO_BE_REPLACED

On Tuesday, September 8, the Museum of American Finance will open “Actiёn Handel: Early Dutch Finance and the Founding of America,” an exhibit showcasing the relationship between early Dutch finance and the United States. On display will be financial documents from Amsterdam, including the oldest known share certificate, which was issued by the Dutch East India Company in 1606.

The exhibit will tie in with the city-wide celebration of the 400th anniversary of Henry Hudson’s exploration of the area that became New Amsterdam (and later New York), and will focus on the financial aspects of the area’s first 200 years. The exhibit is a collaboration among the Museum of American Finance, NYSE Euronext, Amsterdam City Archives and the Dutch Exchange Heritage Foundation (Stichting VvdE), and features exceptional documents from these organizations. In addition to the oldest share certificate (which was featured in the 2004 motion picture “Ocean’s Twelve”), the exhibit will include documents relating to early Dutch share trading, the bubbles of 1720, and John Adams’ successful bid to secure a loan from Dutch bankers on behalf of the Continental Congress, which was the first ever U.S. state loan.

The Museum will host a public opening reception for “Actiёn Handel” on Thursday, September 10, from 5:30 – 7:00 pm. To confirm attendance, or for more information, please contact Kristin Aguilera at 212-908-4695 or kaguilera@moaf.org.
“Actiёn Handel” will be on display through October 17, 2009.

The Museum of American Finance, an affiliate of the Smithsonian Institution, is the nation’s only public museum dedicated to finance, entrepreneurship and the open market system. With its extensive collection of financial documents and objects, its seminars and educational programming, its publication and oral history program, the
Museum portrays the breadth and richness of American financial history, achievement and practices. The Museum is located at 48 Wall Street, on the corner of William Street, and is open Tues-Sat, 10 am – 4 pm. For more information, visit www.moaf.org.