Legendre was descended from the Amsterdam, New York, Sanfords who made a fortune in the carpet industry. END_OF_DOCUMENT_TOKEN_TO_BE_REPLACED

Performer and teaching artist Dave Ruch will be live on Facebook each week for a 30-minute live program of songs, stories, history and humor.

Ruch’s “Live From The House” series explores some of the music that our ancestors sang and played (and passed down through the generations) for their own entertainment before the age of record players and radios. END_OF_DOCUMENT_TOKEN_TO_BE_REPLACED

Fox’s 1902 History of the Lumber Industry in the State of New York, written under the auspicious of Gifford Pinchot, is considered among the first authoritative works on the logging industry in New York. END_OF_DOCUMENT_TOKEN_TO_BE_REPLACED 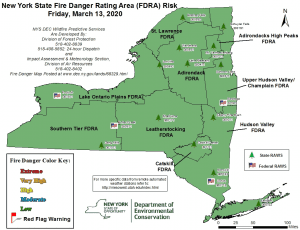 With spring approaching, conditions for wildfires will become heightened, and residential brush burning is prohibited March 16th through May 14th across New York State. END_OF_DOCUMENT_TOKEN_TO_BE_REPLACED

The Post-Star of Glens Falls received first-hand accounts of the 1920 Republican National Convention from Washington County suffragist Betty Wakeman Mitchell, who had a choice seat in Section 70 of the Chicago Coliseum, where she could hear the nominating speeches.

Two years earlier Mitchell had run unsuccessfully in a Republican primary for the state Assembly seat representing Washington County (once the home of Susan B. Anthony). END_OF_DOCUMENT_TOKEN_TO_BE_REPLACED 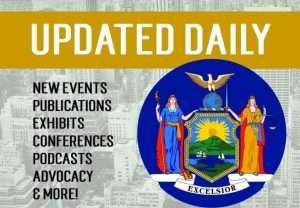 This new publication is an expanded offering, including not only History in the Empire State, but also Arts & Culture, Nature & Environment (including wildlife, environmental politics, etc.), and Outdoor Recreation.

(If you’re not already getting our daily news e-mail, sign up for a subscription here). END_OF_DOCUMENT_TOKEN_TO_BE_REPLACED

Neither colonial North America nor the United States developed apart from the rest of the world. Since their founding, both the colonies and the United States have participated in the politics, economics, and cultures of the Atlantic World.

And every so often, the politics, economics, and cultures of lands in the Pacific and Indian Oceans intersected with and influenced those of the Atlantic World. That’s why in this episode, we’re going to explore the origins of the English trade with India and how that trade connected and intersected with the English North American colonies.

END_OF_DOCUMENT_TOKEN_TO_BE_REPLACED

Like every organization in the state and nation, Schenectady County Historical Society (SCHS) is responding to the national emergency caused by the spread of the coronavirus.

In New York State, our historic sites and museums—along with other “non-essential” businesses—have been necessarily closed for an indeterminate period of time. END_OF_DOCUMENT_TOKEN_TO_BE_REPLACED

The circular sandstone fort which currently stands in Battery Park, was built to improve harbor fortifications in 1811. The Southwest Battery, as it was known, never fired a shot. END_OF_DOCUMENT_TOKEN_TO_BE_REPLACED 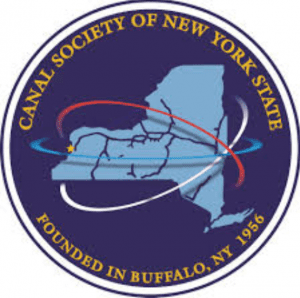 The Canal Society of New York State is seeking an Executive Director to ensure fulfillment of the Society’s mission and strategic plan and to implement administrative procedures for the day-to-day financial and operational oversight of the Society’s properties, staff, collections and programs. END_OF_DOCUMENT_TOKEN_TO_BE_REPLACED