From its military beginnings as a colonial militia in 1755, Governors Island became a major headquarters for the U.S. Army and Coast Guard, making it one of the longest continually operated military installations in the country until its closure in 1996. END_OF_DOCUMENT_TOKEN_TO_BE_REPLACED

On The Historians Podcast with Bob Cudmore, Roger Higgins, author of Billy Gogan Gone Fer Soldier, tells about his historical novel concerning an Irish immigrant to America and his experiences in the Intervención estadounidense en México, the Mexican War, in the 1840s. END_OF_DOCUMENT_TOKEN_TO_BE_REPLACED 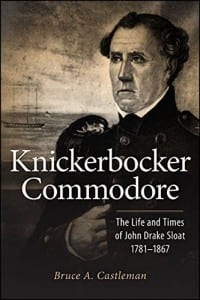 Castleman explores Sloat’s forty-five-year career in the Navy, from his initial appointment as midshipman in the conflicts with revolutionary France to his service as commodore during the country’s war with Mexico. END_OF_DOCUMENT_TOKEN_TO_BE_REPLACED

We’ve all heard of Woodstock at one time or another—that famous (or infamous) concert held in August 1969. It was scheduled at different venues, but the final location was actually in Bethel, New York, about 60 miles from Woodstock. For many who lived through three major homeland assassinations, the Vietnam War, and the racial riots of the turbulent 1960s, Woodstock was an event representing peace, love, and freedom. It’s considered a defining moment of that generation, and a great memory for those who attended (estimated at 400,000). END_OF_DOCUMENT_TOKEN_TO_BE_REPLACED